Stop the Inhuman Persecution of Falun Gong in China 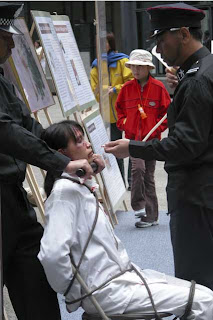 July 20th will mark eleven years of inhuman persecution of the Falun Gong community by the Chinese party-state. It’s thus good to see so many Canadians of such varied cultural and religious backgrounds standing in solidarity today in our national capital. Officials in must end this horror begun in mid-1999. More and more people across the world are aware of this new crime against humanity and want it stopped now.

The Communist Party has deployed the most vicious lies in state media to demonize Falun Gong and used all available means to persecute those who believe in its principles. In contrast, for 11 years, Falun Gong practitioners in and around the world continue to use only peaceful means to raise awareness and expose the crimes of the regime, seeking to stop the persecution.

Read more
Posted by MaKina at 8:45 AM