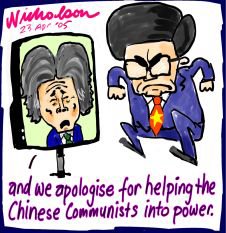 When Taro Aso asked the world to take notice of China's imperial intentions, he introduced a startling note reserved in Asian diplomacy for grave business. Tokyo's top diplomat had exhausted all peaceful explanations for the communist giant's arms expansion.

It's possible to put it all down to a longstanding rivalry between the Asian neighbors. But real tensions have surfaced recently, with Japanese Prime Minister Junichiro Koizumi visiting shrines dedicated to World War II-era soldiers who occupied China. China's rulers responded by orchestrating anti-Japanese rallies across their country, demanding the United Nations exclude their island neighbor from the Security Council.

China's spectacular growth over the last two decades, since the late "paramount leader" Deng Xiaoping unleashed market reforms, naturally has swelled the People's Liberation Army coffers. The PLA even partners with many of the nation's "private" enterprises, prompting some political taxonomists to describe China as more fascist than communist.

Such proclivities seldom carry benign intentions. A PLA general was, well, not quite reprimanded earlier this year when he boasted about launching missiles capable of striking North America. But Beijing's threats to the independence of Taiwan's 22 million people, and its preposterous claim of sovereignty over the South China Sea, have to be taken seriously.

Jack Wheeler, an American writer-adventurer who helped formulate the Reagan Doctrine, last week gave a Taiwan audience a bracing scenario. If you were expecting Beijing to hold back on its threats until after the 2008 Olympics, he warned, you should think again. Wheeler enumerated reasons the next 15 to 18 months were critical.

Against such worries, Premier Wen Jiabao's Cabinet released its document. "To stick to the road of peaceful development is the inevitable way for China to attain national prosperity and strength and its people's happiness," it said. "China's development will never be a threat to anyone."

Indeed, 1.3 billion Chinese, many of them manufacturing the affordable goods that were unwrapped in American living rooms on Sunday morning, have become vital participants in the world's economy. Trade does trump war — unless a ruling party's ancient regional designs, given economic muscle, can't be held in check by multi-party democracy. So what's to stop Wen, his peaceful protestations to the contrary?

Neither Japan nor Taiwan, understandably, should be reassured by a paper that reads like the work of those happy scribes at Hallmark. For that matter, the U.S., which considers China an ally in the war on terrorism, should ratchet up the skepticism.

This week brought news that the State Department has sanctioned several Chinese firms for transactions aiding Iran's buildup of missiles and chemical warfare capability. It's an easy assumption that the PLA knew of such enterprises.

When Beijing suited up for President Bush's war on terrorism four years ago, some of us wondered what fate would befall Uighurs and other Muslim groups resisting communist rule in China's remote west. If they were to be designated terrorists, then American assent would betoken a reversal of the Reagan Doctrine, which famously assisted popular resistance to communist regimes.

Now we're faced by even more troubling questions. Author D.J. McGuire, a student of China's foreign mischief, has been chronicling the ways in which our alliance has been undermined. Start with Sept. 11, 2001, itself. China that day signed an economic cooperation pact with the Taliban, Afghanistan's then-Islamofascist rulers.

It went downhill from there. As U.S. troops liberated Afghanistan, they found mounting evidence — from weapons to communications technology — of Chinese aid to al-Qaida, the Taliban-sponsored terrorist network that attacked America. Beijing was doing everything in its power to block a pro-American government in Afghanistan.

Among the weapons found in al-Qaida hide-outs: Chinese-made surface-to-air missiles. According to McGuire, the trade went robustly both ways. When, in 1998, the Clinton administration fired some cruise missiles at Osama bin Laden's boys, Beijing paid the terrorists $10 million for the unexploded ones.

Ronald Reagan used to say, when in discussions with the late Soviet Union, "Trust, but verify." Beijing, in self-interest, may well have suppressed North Korea's outlaw ambitions. And China's integration into the world's market-driven economies properly gives reasons for hope.

Still, the Bush administration, keeping the Yankee trader tradition alive, should keep the powder dry.
Posted by MaKina at 12:18 AM