Song for American Charles Lee detained by the CCP 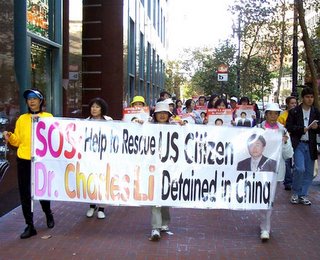 Drew Parker and friends from Florida have just released a new version of the song "Free Charles Lee" about an American Falun Gong practitioner held by the CCP since 2003. You may download here.

Epoch Times: 06 Jan. 2006 - Sitting in a Chinese court, American citizen Dr. Charles Lee chose to represent himself because, though it was no longer illegal to defend Falun Gong practitioners, lawyers were ordered to be in line with the Chinese Communist Party (CCP). And the CCP is known to deal quite harshly with anyone associated with Falun Gong.

Dr. Lee had gone to China to expose the brutal persecution of Falun Gong at the hands of the CCP. He had hoped to tap into a state-run cable network and broadcast programs that clarified issues in the propaganda against Falun Gong found in the Chinese media. However, Lee was arrested as soon as he arrived in China, before he had the chance to do anything.

This is the second article in a three-part series covering the imprisonment of Dr. Lee, an American citizen and Falun Gong practitioner who has spent nearly three years in a jail in Nanjing, China.

According to a letter written by Dr. Lee when in jail, after he deplaned in Guangzhou, China, he was immediately beaten and arrested. For the next three days he was bound in handcuffs and deprived of sleep, while officials took turns attacking him in interrogation. He said that the way he was handcuffed caused excruciating pain and that in the months that followed his imprisonment they tried to make him stop practicing Falun Gong.

In the wake of Charles' arrest, his fellow Falun Gong practitioners around the country raised the issue to their government representatives, and conducted a signature campaign calling for the U.S. government to ensure his release. Senators and members of Congress called on the Secretary of State, as well as Chinese ambassadors, to help Charles. Also, a dear-colleague letter from Congresswoman Anna Eshoo, Dr. Lee's representative, garnered 83 supporters in Congress. The letter asked China to "do everything possible to ensure Mr. Li's [Lee] safety and effect his immediate release."

Dr. Lee went to a one-day trial on March 21, 2003, where he chose to defend himself. In 1999, Beijing had forbidden lawyers from defending Falun Gong practitioners, but later loosened the stance in 2001 to be such that attorneys must act "in accordance with the tone of the Central Government."

His charge was for "sabotaging TV and/or radio equipment," but was later changed to "preparing" to sabotage. Lee has said that he had no intention of injuring equipment, and that the electronics he brought would not have caused any damage. Nevertheless, he was found guilty and sentenced to three years in prison.

Lee later noted in a letter that, "During the court trial, the judges repeatedly deprived me of my right to present evidence and defend myself." He wrote that the judge did not allow him to question witnesses from the prosecution, who had given false testimony. Additionally, he was neither allowed to question the prosecutor, nor present evidence of his innocence. In the same letter, Dr. Lee wrote, "One learns from incidents like this, that the law in China is a tool to be used in the persecution against Falun Gong. It has nothing to do with safeguarding justice."

While in handcuffs and in the same winter clothes he had been in for months, Lee wrote the 96-page "Letter from a Nanjing Jail," which detailed his treatment, as well as the political nature of his imprisonment and how Falun Gong fit into the picture. Chinese officials withheld eight pages from the U.S. Consulate in Shanghai, until Dr. Lee went on a hunger strike for eight days to protest, and the officials gave in and delivered the entire letter.

After his guilty verdict, Charles was treated even worse. If he attempted to do any of the Falun Gong exercises, inmates were told to beat him up. In July 2003, during a hunger strike to protest his inhumane treatment, Lee was force fed with a hard plastic tube inserted into his nose, which was left there for 33 hours, causing intense pain.

Starting in December 2003 they forced him to make shoes, which continued until June 2004 when they made him make Christmas lights for 10-12 hours a day, seven days a week.

Brainwashing, however, has been a problem throughout. "The Chinese Communist Party has never stopped persecuting Charles, and has never stopped trying to brainwash him," said Yeong-Ching Foo, Dr. Lee's fiancée, and also a Falun Gong practitioner. Foo has been his staunchest supporter, and has maintained contact with U.S. Consular officials in Shanghai who are in touch with Dr. Lee.

The brainwashing classes, or "re-education classes," have varied in intensity over Lee's stay in jail, at times being nearly all day long. At one point, Lee neared death after 48 days of being forced to sit up straight on a bench looking forward for four to seven hours a day. It only stopped when he began to experience a fast heartbeat and shortness of breath. This condition continues to afflict Dr. Lee, and he still must attend reeducation classes.

In the last three years, besides the numerous rallies and press conferences calling attention to Dr. Lee's plight, there was also a van tour during the summer after his trial. Falun Gong practitioners drove across the country, stopping to talk to local media and government, describing what happened and raising awareness. Over 120 media reported on the case at that time.

Dr. Lee's three-year sentence will be up later this month, but for now he is still a prisoner. Ms. Foo cautions that the CCP has a history of intensifying persecution at the end of a sentence, especially with Falun Gong practitioners where they try to strip them of their beliefs before they release them.

In the next and last article of this three-part series, we will discuss the upcoming release of Dr. Lee and the lessons learned by all who were involved in the efforts to free him from imprisonment in China.

You can read part one of this series here: Unshakeable Belief: The Story of Charles Lee
Posted by MaKina at 12:18 AM