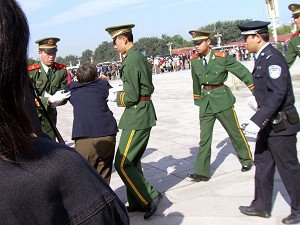 (5) Killing people in order to cover up the truth

The people’s right to know is another weak point of the CCP; The CCP also kills people in order to block information. In the past, “listening to the enemy’s radio broadcast” was a felony that was punished with prison terms. Now, in response to multiple incidents of the interception of the state-owned television system to clarify the truth of the persecution of Falun Gong, Jiang Zemin issued the secret order to “kill instantly without mercy.” Liu Chengjun, who carried out such an interception, was tortured to death. The CCP has mobilized the ‘610 Office’ (an organization similar to the Gestapo in Nazi Germany that was created to persecute Falun Gong), the police, prosecutors, courts and a massive Internet police system to monitor people’s every action.

BEIJING (Reuters) 26 Jan. 2006 - China is preparing to "strike hard" against rising public unrest, a senior police official said according to state media on Thursday, highlighting the government's fears for stability even as the economy booms.

"For a considerable time to come, our country will be in a period of pronounced contradictions within the people, high crime rates, and complex struggle against enemies," the official said.

"Contradictions within the people" is a Maoist term used to describe domestic social unrest.

China was suffering many "major sudden incidents" -- a term Chinese officials use to cover riots, protests and accidents -- the official added.

He also said that "terrorism is a real threat against our country" and urged officers to guard against attacks.

China says that its biggest terrorist threat comes from Xinjiang, the far western region dominated by the largely Muslim Uighur people who share a language and culture similar to Central Asian countries.

Uighur groups have campaigned for independence from China, and a few have had links with Islamic extremists in Afghanistan and Central Asia.

The latest unusually grim police diagnosis of China's social strains comes less than a week after Premier Wen Jiabao was reported as warning that corrupt land seizures in the countryside were stoking protests and riots.

"Some locales are unlawfully occupying farmers' land and not offering reasonable economic compensation and arrangements for livelihoods, and this is sparking mass incidents in the countryside," Wen said in a speech published on Jan. 20.

Wen said the continued "reckless occupation" of farmland threatened "the stability of the countryside and whole economy and society". He promised stricter land controls and improvements to farmers' rights and income.

But the police official promised a harsher and more traditional remedy.

Summoning harsh rhetoric that has languished in recent years while the government promoted "rule of law", the official promised to "strike hard against all sorts of terrorist activities and resolutely protect state security and social stability".

During the 1980s and 1990s, regular "strike hard" campaigns were used to fight crime and threats to order by mobilising police and courts to catch and quickly try and sentence many thousands of citizens.

In recent years, legal reformers have criticised such campaigns as contrary to China's official embrace of rule of law and human rights.

But on Thursday, a meeting of law and order officials announced a new campaign against the "sabotage activities of cult organisations", Xinhua said in a separate report.

China calls the Falun Gong, a spiritual sect banned in 1999, a "cult" that threatens the government.

The meeting also called on officials to "strictly prevent destructive activities by terrorist forces and domestic and foreign hostile forces and elements," the report said.

Xinjiang authorities arrested more than 18,000 people there for crime, including national security offences, the region's official newspaper said last week.
Posted by MaKina at 8:48 AM