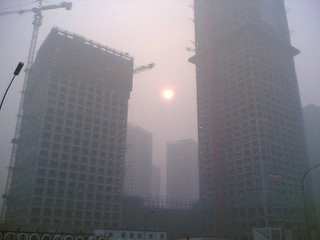 Beijing has slipped out of a list of China's "10 most liveable cities" even as it spends billions of dollars sprucing up for the 2008 Olympics.

Reuters, 04 Jan. 2006 - Beijing has slipped out of a list of China's "10 most liveable cities" even as it spends billions of dollars sprucing up for the 2008 Olympics.

The survey, conducted by Beijing- based pollsters Horizon Group, found Dalian, a green coastal city in northeast Liaoning province, was number one.

The survey, which measured the "urban habitable index," took into account such issues as traffic, environment, social welfare and security.

The fall in standings may well prove embarrassing for Beijing's urban planners, as they race to beautify the capital ahead of the 2008 Olympic Games. But International Olympic Committee chiefs have expressed confidence in the city's preparations, with billions of dollars being spent on new stadia, airport facilities, transport and other infrastructure.

The survey also reflected concern over the growing chasm between China's haves and have-nots as the nation pursues fast economic growth and a modern, consumer-based society.

"Investors and high-income groups showed a high degree of satisfaction," the paper quoted the Horizon Group as saying. "But low-income groups were generally dissatisfied because of soaring housing prices and the grim employment situation."

Concerns are frequently raised in China and internationally over pollution woes and other consequences of "modernization," such as the destruction of Beijing's heritage and the livelihood of the urban poor.

Separately, a section of highway running past Beijing's central business district caved in early Tuesday, rupturing a sewage pipe and flooding a construction site for the subway the city is scrambling to build for the Olympics.

There were not thought to have been any casualties, a spokeswoman for Beijing Track Transportation Construction Management said. And it was too early to conclude the cave-in was caused by the subway construction, which is under way all along Beijing's third ring road where the accident happened, she said.

But the collapse caused sewage to flood one of the subway construction sites, Xinhua News Agency said.

Police said the accident was caused by a water leak. Motorists were asked to stay away from the scene, where traffic was backed up for several kilometers on an otherwise quiet day, with many offices shut for a public holiday.

Beijing is spending a staggering US$40 billion (HK$312 billion) to prepare for the Olympics, much of it on big ticket transport items, including a near doubling of the light rail and subway networks in the notoriously smoggy and traffic-snarled city.

Beijing suffered a similar accident in November, when a drainage leak created a 400-square-meter pit of water.

Shanghai experienced woes building its subway when a tunnel under the city's Huangpu River collapsed, causing nearby land and buildings to sink and flooding in nearby areas. Three officials were arrested in connection with the accident, which cost Shanghai 850 million yuan (HK$816 million).