The panda strategy pays off 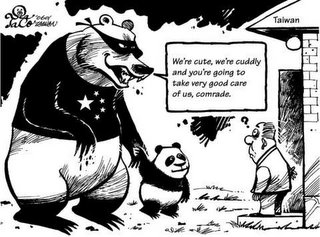 The panda strategy pays off

Taipei Times: 08 Jan. 2006 - The pair of cuddly panda bears hand-picked by the Chinese government as gifts for Taiwan have become a most effective propaganda tool in the war for hearts and minds. Chinese officials must be congratulating each other on a job well done, for they could never have hoped to create such fierce internal division in Taiwan by targeting the nation with missiles -- a tactic which is far more costly and also damaging to the image of the Chinese government.

The overwhelming success of the ploy was amply demonstrated by the press conference held by China's Taiwan Affairs Office (TAO) on Friday. The event almost felt like a mixture of an Academy Awards ceremony and a Christmas party, with enthusiastic press coverage, suspense over which two lucky pandas had been picked from the list of finalists, distribution of souvenir pins, laughter and a generally festive atmosphere. Even TAO officials, usually notable only for their harsh comments about "Taiwan's splittist activities," reveled in the collective role of Santa Claus.

This naturally puts the Taiwanese government in an extremely embarrassing position. Obviously, a large segment -- if not a majority -- of the public would be sympathetic to the pan-blue argument that there can be no harm in accepting a pair of cuddly pandas.

Although the press conference held simultaneously by the Mainland Affairs Council (MAC) on Friday to condemn the gift as "unification propaganda" spoke the simple truth, it is inevitable that the MAC will be perceived as cold-hearted by a lot of people. Taiwan -- which is typically on the receiving end of Chinese abuse in the cross-strait relationship -- was seen to be the one dishing it out this time around.

One cannot help but feel that the government underestimated the "soft power" of the panda strategy and failed to carry out damage control. It is not as if they didn't have any warning.

Talk of China making Taiwan a gift of a pair of pandas as a symbol of "peace" and "unity" began during former Chinese Nationalist Party chairman Lien Chan's (連戰) visit to China last summer. This was followed by a long panda selection process that enjoyed periodic coverage in the media. During this time, some Taiwanese officials have, under pressure from the media, mumbled words to the effect that accepting China's offering may be problematic. However, these voices were drowned out by the hubbub over the pandas' seemingly imminent arrival. Now that all the preparations seem to be in place and the only thing lacking is the permission of the Taiwanese government, the MAC has finally turned up the volume. This exposes poor planning on its part.

In all the excitement, a lot of people seem to have forgotten that even if the considerable political problem is somehow overlooked, accepting this gift is not as simple as it seems. Matters of Taiwanese and international law pertaining to the importing and exporting of endangered species cannot be ignored simply because the pandas are a gift from China. The public needs to be aware that these more mundane concerns -- not just the political ones -- could lead to the pandas being rejected. However, after the MAC's poorly orchestrated press conference on Friday, few may be willing to accept this.