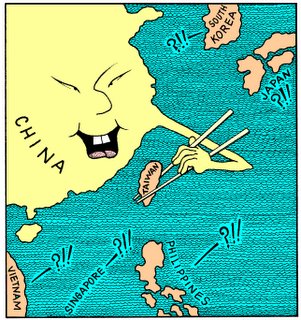 Ottawa Citizen 15 Jan. 2006 - In any election, there are a lot of big things that don't get discussed, but none of them is bigger than Canada's relationship with China.

To listen to Conservative Stephen Harper and Liberal Paul Martin, you'd think the big Canada-China issues were a fee on immigrants and an apology for a head tax on Chinese that was last charged in 1923. Harper gets an extra half-mark for saying the Kyoto accord doesn't mean much without imposing restrictions on a polluter such as China.

The official line from the Liberals is that China presents great economic opportunities for Canada. All we need is more education, better cities and more innovation.

If only it were true. Canada's real relationship with China is much different. In 2004, we imported $24 billion of goods from China, but sold the Chinese only $6.6 billion. In our trading relationship, we play the role of Third World country, exporting raw materials to China so the Chinese can sell us manufactured products. Go into any retail store and you will see our market is flooded with Chinese goods. You used to be able to buy clothing, shoes, electronics and sporting goods that were made in North America. Good luck trying to find them now.

We import more from China every year, but we are making few inroads in the Chinese market. What could we sell them other than raw materials? We simply can't compete with China. The average annual income for a Canadian was $35,300 in 2004. In China, it was only $2,300. How could you fight a wage gap like that? Add in an artificially low currency, a huge domestic consumer base and a solid education system, and the

Chinese have an economy that's in an entirely different league than ours. Think of the Ottawa Senators playing a peewee team.

If we do have something the Chinese want, like icewine, they unscrupulously bottle some local plonk and call it Canadian icewine.

Canada isn't alone in getting its economy hammered by the Chinese. China's trade surplus with the world was $101.9 billion last year. That's according to China. Experts in the West say it's easily four times that much.

In the United States, legislators at least realize the trade imbalance is a problem. Senator Chuck Schumer is proposing a 27 per cent tariff on all Chinese goods if the Chinese government doesn't adjust its currency. China's economic success should have boosted its currency by now, increasing the price of its goods and making it easier for others to compete. The government has kept the currency artificially low. Our leaders aren't speaking about this, even though Canada's trade figures with China are quite bad.

The problem in dealing with China goes well beyond the impact on our economy. Bluntly put, China is a polluting, repressive regime, and we're supporting that every time we buy Chinese goods. And yet, since the time of Pierre Trudeau, our political and business leaders have toured China like puppy dogs begging for scraps from the Chinese economic table. We're told the politicians make an obligatory mention of human rights. That must mean a lot to China's jailed dissidents.

In Canada, Paul Martin is trying to alarm us with the idea that Stephen Harper might override the constitution to take away someone's right to something. Imagine, a country with rights. In China, repression of anyone who doesn't agree with the regime is routine.

Canadian leaders talk about Kyoto and offer a transit pass tax credit to get us to ride the bus. Meanwhile, we continue to do business with a country that pollutes the environment on a scale that we can barely comprehend. In its race to rapidly expand its economy, China hasn't bothered worrying about the damage to the environment.

Martin keeps saying he supports Kyoto, but without a country such as China included, how much value does it have? Kyoto classified China as a "developing" country, but it is estimated that its economy will be the fourth-largest in the world this year. Some development.

Our leaders failure to grasp the real importance and nature of China shows we are still an immature, inward-looking country. The broader world and Canada's place in it have received barely a mention in this election. Instead, as the campaign goes into its final days, Harper and Martin are obsessed with television ads that are about the equivalent of two shcool kids shooting "boogerhead" and "doofus" at each other, but with better production values.