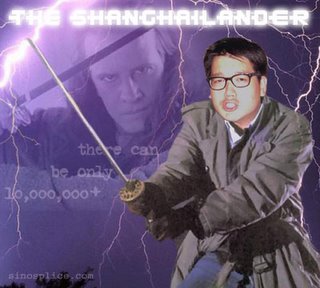 by Joan Quain and M.Makina

Victoria, 10 January 2006 - In an attempt to export Communist China’s ideology to the Chinese people and the western world, 9 Chinese TV services have applied to CRTC/Canadian Radio-Television and Telecommunications Commission for their license. According to the US Congressional Executive Commission on China, Shi Feng, a senior Censorship Agency official, states that the Chinese authorities must “consolidate the Party’s propaganda” to ensure continued Party supervision of public opinion. Reporters Without Borders has called China’s largest news agency, Xinhua, “the world’s biggest propaganda agency.”

Here are some examples of Chinese TVs' news reports over the years. In the immediate aftermath of the 9/11 attack, CCTV, Beijing TV and other CCP propaganda machine aired a documentary called "Attack America". The Commentator made the following remarks: "This is the America the whole world has wanted to see. Blood debts have been repaid in blood. America has bombed other countries and used its hegemony to deny the natural rights of others without paying the price. Who until now has dared to avenge the hurts inflicted by unaccountable Americans."

During the 1989 Tiananmen massacre, the students were described as thugs attacking the People's Liberation Army—they claimed that no students were killed. They stated that the Tibetans are happy to be governed by China and that Tibet had improved since the occupation. As a rule pro-democracy activists are all demonized. The CCP constantly blame and shame neighbouring democracies, Japan and Taiwan, to divert people's attention from their vile sins. Since 9/11 they’ve reported that the Uyghurs are all terrorists to further persecute them. During the SARs outbreak, they broadcasted that there was no SARs—it’s safe to travel to China. Go here to see an example from Talentvision of a blatant attack made on Falun Gong supported by a CBSC judgement.

A segment from the Nine Commentaries on the Communist Party further explains the magnitude of the CCP’s hate propaganda targeted at Falun Gong. “The policy of ‘ruining [Falun Gong practitioners'] reputations’ has been carried out by the media, which are under the absolute control of the CCP. Starting on July 22, 1999, the third day into the campaign of arresting Falun Gong practitioners across the country, the CCP-controlled news media launched a full-scale anti-Falun Gong propaganda blitz. Take the Beijing-based China Central Television (CCTV) as an example. In the remaining months of 1999, CCTV spent seven hours a day broadcasting preprogrammed footage to spread lies about Falun Gong. Producers of these programs started by distorting and falsifying speeches by Mr. Li Hongzhi, founder of Falun Gong, then threw in cases of so-called suicide, murder, and death due to refusal of medical treatment. They did everything they could to smear and frame Falun Gong and its founder. The CCP then uses the media to instigate hatred among the deceived public, justifying and seeking support for the unpopular, bloody persecution.

Over 2,000 newspapers, over 1,000 magazines, and hundreds of local TV and radio stations under the absolute control of the CCP became overloaded in their all-out propaganda smear campaign of Falun Gong. These propaganda programs were further spread to every other country outside of China via the official Xinhua News Agency, China News Services, H.K. China News Agency, and other CCP-controlled overseas media. Based on incomplete statistics, within only six months, over 300,000 news articles and programs smearing and targeting Falun Gong were published or broadcast, poisoning the minds of countless deceived people.”

It is clear that these 9 Chinese TVs will do a great disservice to the Canadian people by broadcasting mostly 'biased and fabricated' news reports as in the past—a mere extension of the CCP's hate propaganda machine. This is not welcome and must be stopped. Let’s not forget that Phoenix North American Chinese Channel (PNACC) got involved in espionage and was arrested for stealing military secrets last November. One more reason to discredit those Chinese TVs.

Let’s keep it up by writing to CRTC (Fax: 819-994-0218) and copy CCTA (Fax: 613-232-2137) to oppose the application by the 9 Chinese TV services for inclusion in the CRTC’s list of eligible satellite services for distribution on a digital basis. Or send you comments here.

This reference No. is mandatory—Re: Broadcasting Public Notice CRTC 2005-124. Letter writing guidelines can be found here.