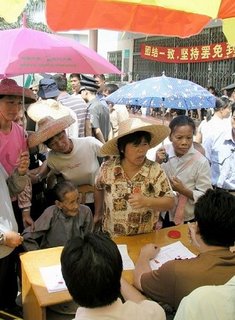 HONG KONG (Radio Free Asia) 19 Jan. 2006—Local authorities across China were scrambling to keep the lid on popular unrest in 2005, as new figures showed clashes on the rise from a year earlier.

The number of cases of public disorder in China rose to 87,000 last year, an increase of 6.6 percent compared with 2004, the Ministry of Public Security said Thursday.

“The crime of disturbing public order has increased, including obstruction of justice, the gathering of mobs and fighting and making trouble,’’ the ministry news release said.

In the central province of Hunan, police called out to a traffic accident in Hengyang city found themselves confronted by more than 1,000 bystanders angry at their handling of the situation.

Several protesters and police were injured in the violence, which erupted when crowds became angry that police delayed calling for medical help in the wake of the accident.

Crowds dispersed only after armed police fired shots into the air, reports said.

“Yes, there were some people who decided to cause trouble,” an officer who answered the phone at the Hengyang municipal police patrol told RFA Thursday. “The police have now dealt with the situation.”

In land disputes where popular opposition surfaces in protest or activism, local authorities frequently target key activists, or “instigators”, together with any lawyers working on their behalf.

Beijing-based lawyer Gao Zhisheng has had his law firm’s license revoked after he became involved in defending several high-profile land disputes and spoke out publicly on behalf of the banned Falun Gong movement, whose supporters say they have been subjected to harassment and systematic torture nationwide since their practice was banned in 1999.

Gao said a vehicle with half its license plates blocked from view braked at high speed on an expressway in the capital, right in front of his car, Wednesday.

“They braked right in front of me at high speed with a loud noise. That noise made me brake at the same time. They seemed to be hoping that if I injured one of them they could arrest me, or perhaps they wanted to injure me,” Gao told RFA Mandarin reporter Ding Xiao.

“The number plates of the car in question had been partly obscured by newspaper.”

In the southern province of Guangdong, several residents of Taishi village were detained after meeting their lawyer Guo Feixiong, who worked for Gao’s firm.

Guo and several clients were detained after a campaign to recall the elected village chief amid corruption allegations was suppressed by the authorities amid clashes and intimidation campaigns.

“Those villagers from Taishi that I met up with were taken to the police station by police yesterday,” Guo said Thursday. “They were held for questioning for around an hour, and warned not to meet Guo Feixiong again.”

A resident of Taishi confirmed a continuing police presence and cordon around the village, months after activists abandoned their campaign.

“Some of the villagers have said that they were taken in for questioning by the police in recent days,” the man said.

“This has to do with the blacklist. There have also been a lot of plainclothes police on patrol in the village. The atmosphere here appears calm on the surface, but it is still very hard to get into Taishi village from outside,” he told RFA’s Cantonese service.

He said villagers were divided over fresh plans to reallocate land within the village, and that a consensus still hadn’t been reached. He said he was concerned that the issue would hang over past the Lunar New Year and delay the spring planting.

Meanwhile, a team of officials from the southern port city of Shanwei is visiting villagers in Dongzhou township, scene of the Dec. 6 shootings in which three people are known to have died.

Residents say they are trying to allocate a compensation fund of around 6 million yuan (U.S.$743,717) following the clashes to families of the dead and injured.

“Basically, they give us the money, which hints that the issue will be over. I am poor, but I wouldn’t take these few hundred yuan,” one villager told RFA reporter He Shan.

“They give you the money, you sign with your finger print. Then if one day the central government has any order [in our favor] from the top, they [the local officials] would say that reimbursement was distributed to the farmers, and that here we have their signatures and finger prints. This is the evidence.”

“This means we can no longer challenge them in court. There will be no case if we sign and receive the money,” she said.

An official who answered the phone at the Shanwei municipal Party secretary’s office promised that all compensation deals would be honored before work resumed on construction projects.

“The situation in Dongzhou will be handled according to official guidelines and legislation,” the official said.

“Our provincial Party secretary has made it clear that...the compensation must have all been delivered to the people who need it before any construction project using rural land can begin. This isn’t such a major incident, so we’re honored that you are concerned about it,” he said.

And authorities in Sanjiao village near the southern city of Zhongshan have stepped up “public education” campaigns following violent clashes between police and residents last week over a similar land dispute to those in Shanwei and Taishi village.

"The television news reports are all saying that the villagers of Sanjiao were causing trouble, and they were in the worng." They interviewed some other people who said the government acted within its rights,” one local resident said.

A 13 year-old girl reported to have been beaten to death by police during the clashes was reported by official media to have been suffering from heart disease, and to have died on her way home from school four kms (2.5 miles) from the incident.

Another resident said: “They are sending people here to tell us that anyone who is in economic difficulties will be helped. The compensation wasn’t enough, and complaining hasn’t made any difference.”