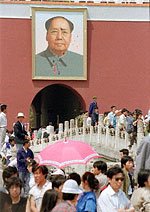 Congressional-Executive Commission on China: 30 Jan. 2006 - Imprisoned journalist and Tiananmen democracy protest participant Yu Dongyue's sentence will expire on February 26, 2006, according to the Dui Hua Foundation, a U.S. NGO that advocates for prisoners of conscience in China.

According to PEN Canada, Yu, then a deputy editor of the Liuyang Daily, traveled from Changsha city, Hunan province, to Beijing on May 19, 1989. He was a representative of the Hunan Delegation in Support of the Beijing Students, which traveled to join the Tiananmen democracy protests. On May 23, Yu and two others - Yu Zhijian and Lu Decheng - threw paint at the portrait of Mao Zedong that faces Tiananmen Square from the Forbidden City. Police immediately arrested the three. Yu was tried on July 11, 1989, and on August 11, the Beijing Intermediate People's Court sentenced Yu to 20 years in prison and 5 years deprivation of political rights for "counterrevolutionary propaganda" and "counterrevolutionary sabotage and incitement," crimes under Articles 100 and 102 of China's 1979 Criminal Law. In 1997, authorities transferred Yu to Yuanjiang Prison in Hunan. According to the Dui Hua Foundation, Yu received a 2-year sentence reduction in January 2001 and a second, 15-month sentence reduction, some time in 2003.

Yu Zhijian and Lu Decheng, who were sentenced for the same act of paint throwing, were both released in 1998. Officials have offered no explanation for why they released them, but kept Yu Dongyue in prison. In December 2004, Radio Free Asia (RFA) reported that Lu visited Yu Dongyue in prison and said that he was "barely recognizable." Lu described Yu Dongyue as disoriented, with a visible head injury. Another prisoner told Lu that prison officials tied Yu to an electricity pole and left him outside in the hot sun for several days. The fellow inmate also said authorities kept Yu in solitary confinement for two years, and offered the opinion that this punishment is "what broke him." PEN Canada has expressed concern that Yu has suffered psychological trauma as a result of harsh treatment in prison.

According to a June 6, 2005, RFA article, Lu and Yu Zhijian have written repeatedly to central government officials in Beijing calling for the release of Yu Dongyue on medical grounds, but with no result. Yu first became eligible for medical parole in 1996, but a June 6, 2005, South China Morning Post article cited his mother as saying that when she submitted the application, prison officials told the family that political criminals could not be granted medical parole and that "he never admitted he was wrong." Article 3 of the "Measure on Implementing Medical Parole for Prisoners" only prohibits three categories of prisoners from eligibility for medical parole: (1) those serving sentences of death penalty with two year reprieve; (2) those whose crimes are serious and toward whom the people have great hatred; and (3) those who injure or incapacitate themselves in prison to escape punishment.