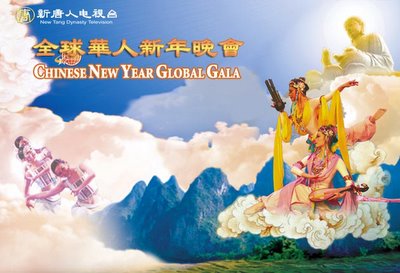 It was reported that CCTV's "The Same Song" special program will be performed in the Rogers Center in Toronto, Canada on Jan 15, 2006, in Los Angeles, Hollywood Kodak Theatre on Jan 21, and again in New York's Radio City on Jan 23. [1]

The "The Same Song" was created in 1990, lyrics by Chen Zhe and Ying Jie, music by Meng Weidong. In 2000, CCTV, the mouthpiece of the Chinese Communist Party (CCP) [2] made a musical program with the same title which it still continues to broadcast regularly. The theme song of the program is none other than "The Same Song".

"The Same Song" is a Tool for the CCP's Ideological Indoctrination

Since its production five years ago, "The Same Song" program has become yet another CCP propaganda tool designed to glorify the Party, following the annual CCTV's Spring Festival Gala. In 2004, as an important part of the CCP's political, ideological and "patriotism" indoctrination, the CCP Ministry of Propaganda, the Central Civilization Office, the Ministry of Education, the Ministry of Culture, The State Administration of Radio Film and Television, the General Administration of Press and Publication, and the Central Committee of Chinese Communist Youth League heavily promoted "The Triple Hundred" to the whole society, and the theme song in "The Same Song" was selected as one of the "100 songs for patriotism education" [3].

Prior to that, "The Same Song" had been used extensively to eulogize the Party's achievements and to glorify Communist political education. On June 28, 2001, a large-scale singing concert called "Ode to the Party" was held at the University of Science and Technology of China (USTC) to celebrate the 80th anniversary of the CCP. "The Same Song" was in the program together with other songs such as "Let Me Sing a Song to the Party, " "Follow the CCP Wherever It Goes," etc. It was meant to "let people experience from the song the difficult yet glorious path that CCP has taken its 80 years history" [4]. In Changji College, "The Same Song" was put on the website of its politics and ideology education network for on line listening. [5]

Part of the lyrics from "The Same Song" were used at the end of a special program, produced by CCTV, about reforming Falun Gong practitioners by Bao Kun, a Lugouqiao community deputy from the Fengtai District of Beijing. [8] In videotape archived at the Beijing Bureau of Reeducation-through-labor Administration, there were footages of prison guards and practitioners singing that song together during a brainwashing session [9].

As part of the brainwashing process, on March 8 2002, the International Labor Day of Women, the All-China Women's Federation organized "March 8th Red Flag Holders [i.e. female model workers]" from all over the country to pay a tribute to the police at the Xin-an Forced Labor Camp under the Beijing Bureau of Reeducation-through-labor Administration. Part the program included the forced singing of "The Same Song" by the practitioners under detention with those "March 8th Red Flag Holders" [10]. On January 22 2001, in a forced labor camp in Daxing County, Beijing, camp officials gathered more than one hundred Falun Gong practitioners, who were forcefully detained for brainwashing and transformation, and ordered them to sing the "The Same Song" together. [11]

"The Same Song" brought back extremely painful memories for the Falun Gong practitioners who had experienced persecution in the brainwash camps. According to a report by the NGO "China Mental Health Watch," a human rights group based in the USA, psychiatric health experts did some preliminary surveys among some Falun Gong practitioners who had been tortured in the forced labor camps in China. The surveys showed that even after living in a democratic and free country for a while, some for two to three years, the practitioners still have symptoms of Post-Traumatic-Stress Disorder (PTSD), including nightmares, insomnia, disturbing memories of the torture, and unusual reactions to events and objects around them that bring back these memories and which induce withdrawal and self-protective reactions. [12]

Transformation through brainwashing is the CCP's most significant method and objective in the persecution of Falun Gong. Among the Falun Gong practitioners who were injured or killed during the persecution, most of them were persecuted because they refused to be "transformed". The "transformation" quota passed down from the central leadership of the CCP forced the Falun Gong practitioners to face the genocide-style persecution of "either be transformed and suffer spiritual death or refuse to be transformed and suffer physical death". Reports from WOIPFG exposed in detail the policy, implementation, and consequences of the brainwash transformation. [13] During the first few years of persecution, the massive CCP's propaganda on transformation and effectiveness of the transformation effectively demonstrated to the worldwide community that it is truly a persecution targeted at faith and belief. Because of this, Liu Jing, the director of the "610 office" of the Central Committee of the CCP and Deputy Minister of Public Security, during an internal speech in June, 2005 formally proposed "Avoid the word transformation " in order "to create a better external environment for our reform and open up". [14]

On October 26, 2005, Chen Weiyuan, editor of State Administration of Foreign Experts Affairs wrote in his article "What the 'Chinese-French Cultural Year' Had Brought to Us," "The success of the Chinese-French Cultural Year is quite an inspiration for our overseas propaganda work. Taking the approach of cultural exchange in overseas propaganda will have a far-reaching and lasting effect and will be well received by the target nation… Culture is a 'soft' component of our nation's power. Cultural diplomacy is a 'soft' dissemination of our nation's will. Compared with economical diplomacy and political diplomacy, cultural diplomacy is able to have our target audience unknowingly accept (our propaganda). Such cultural infiltration through subtle influence cannot be underestimated. [15]

The research group of "the research on efficient foreign propaganda" of Xinhua News Agency believes "The main targets of foreign propaganda should be the middle and upper class in the target countries, including politicians, people in business circles and intellectuals because they control either the political or the economic power and have the influence on the policy and pubic opinion of those countries. Based on our unique characteristics, our media outlets responsible for foreign propaganda should focus on the mainstream media in the target countries; we should strengthen the communications and collaboration with them. Especially, we should make friends with the dignitaries of foreign media. We should have intimate relationship with them, and execute well our foreign propaganda with their help." "Moreover, overseas Chinese and Chinese students studying abroad are another group of people deserving attention from our overseas propaganda… Presently, there are over tens of millions of overseas Chinese and Chinese students studying abroad; many of them have become part of the mainstream society, sometimes were even quite influential elites. Foreigners generally learn about China through overseas Chinese. Therefore, overseas Chinese will provide the bridging and proliferation effect." [16] Thus is the clear and naked expose the intention of the CCP foreign propaganda to strategically infiltrate foreign nations, attempting to unify the whole world with their ideology.

In early 2005 during the American inaugural performance of the "The Same Song" local Chinese Americans were invited to sing together with the singers on stage. In the Silicon Valley performance more than 20 engineers sang "My China Heart" with singer Zhang Mingmin. [17] During this years tour in the U.S., they intend to invite more than 100 local Chinese Americans to sing "I and My Motherland" on stage.

CCP did not just use "The Same Song" to brainwashing more than 1 billion Chinese in Mainland China, the song is also an important tool to extend and continue the brainwashing, instigate "patriotism", and incite extreme nationalism among overseas Chinese.

The New Tang Dynasty Television (NTDTV) started organizing "Chinese New Year Global Gala" in 2004, and received warm response from overseas Chinese community. Its impact also reached Mainland China. The Chinese authority sees NTDTV and other independent media which dare to speak out and refuse to be bribed as its largest threat. Meanwhile, NTDTV's Chinese New Year Gala shakes the monopoly of the much criticized and degrading "Spring Festival Gala" by the Chinese Central Television (CCTV). On December 16, 2003, China's State Administration of Radio, Film and Television sent an urgent, secret, encrypted telegram to the provincial level Radio Film and Television bureaus all over the country and passed down the directives from "leader from the Central Committee of the CCP" that to the NTDTV Inaugural Chinese New Year Global Gala in preparation, "try to knock off, and if not possible to block it, try to minimize its impact, guard against its interference to the 'Spring Festival Gala'" .[18]

On January 2004, political news consul Zhou Xiaomei from the General Consulate of China in Los Angeles wrote letters to some well-known people in the United States and asked them not to accept any interviews by NTDTV regarding the Chinese New Year Global Gala. [19] On February 9 2004, Wang Lili, group leader of the CCP's central Bureau of Discipline Supervision and Investigation in the State Administration of Radio, Film and Television, emphasized in a speech given at the CCP's 2004 annual work meeting that the Inaugural Chinese New Year Global Gala by NTDTV in New York and other cities is "to confront the CCTV's Spring Festival Gala." [20] On October 19 to 20, 2004, the Bureau 26 of the Ministry of Public Security (a working bureau set up specifically for the persecution of Falun Gong) called a meeting in Shenzhen of the directors of 610 offices of the Public Security Bureaus of 9 provinces and cities, to arrange for special case investigations on the three big media, the Epoch Times, the New Tang Dynasty Television, and the Sound of Hope Radio Network. [21]

Based on the background above, there is no coincident about the time and location of the CCTV "The Same Song" performance. Especially the show in New York, not only it is in the same venue, but also on consecutive dates.
NTDTV Chinese New Year Global Gala
City Time Venue
New York City January 21, 22 Radio City Music Hall
Toronto January 28 Toronto Center of the Arts
Los Angeles February 11 Harriet & Charles Luckman Fine Arts Complex

References
Posted by MaKina at 12:45 AM