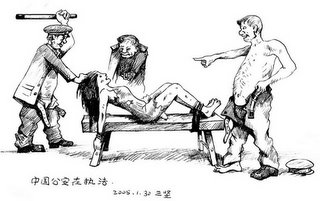 Chinese Lawyer Hits Out at Regime

Rape is one of the 68 capital crimes in Communist China yet the 610 Office Staff is not punished for raping Falun Gong practitioners--go figure!

BEIJING (Guardian) 29 Jan. 2006 - France, Germany and other states that have coddled up to the Communist dictatorship in Beijing will one day have to answer to the Chinese people, one of the country’s leading civil rights activist has told The Observer.

Gao Zhisheng, a firebrand lawyer who has defended hundreds of victims of torture and persecution, said the Communist party was responsible for more deaths than the Nazis, but Western governments turned a blind eye because they were desperate to trade with the world’s fastest growing economy.

‘When the Nazis slaughtered Jews, the outside world condemned them,’ he said. ‘But the Communist party has taken the lives of 80 million people, 13 times more than the death toll among the Jews, yet the world says nothing.’

Gao’s comments are particularly remarkable because he still lives in Beijing, where he is vulnerable to retribution. He says his phone is bugged, his 12-year-old daughter is followed to school and more than 30 agents monitor his every move. Last month, his law firm’s license was revoked and last week he was warned he faces arrest. Ten days ago an unmarked car attempted to run him down. But he is defiant.

Already one of the most prominent lawyers of his generation, Gao, 41 has taken a public stand - via the internet - in favor of the most oppressed groups in China: democracy campaigners, victims of religious persecution, mine accident widows and peasants who have had their land seized by the authorities: ‘The Communist party has done too many evil and cruel things. So I must fight them.’

His office is a small, sparsely furnished flat in a giant residential complex in the Chaoyang district of Beijing, a familiar location to those in China with a cause or burning sense of injustice. So many come to him that the guards on the gate need no prompting to direct strangers to ‘that lawyer’. It is below zero outside, but Gao says that does not put off his state security minders. What does make them flinch is his video camera. ‘They bug me, but I don’t care. They are the ones who are afraid of exposure. When I point this camera at them, they try to conceal their faces. They know one day they will be called to account.’

Turning his enemies’ weapons against them is a typical Gao tactic, as is pushing a situation to its limits. Last year, he went to investigate the government’s confiscation of private oil wells in Shaanxi province. On the way, he heard the authorities were waiting to detain him, so he drove to the police station and confronted the commanding officer. ‘I told him I had saved him a lot of bother so the least he could do is pay for my transport costs,’ he says. ‘He reimbursed me my car rental fee and arranged for a police car to drive me home.’

His visits to China’s provincial badlands do not usually end on such a light note. Last month, Gao slipped his minders to investigate claims of police torture and sexual abuse in Changchun, the provincial capital of Jilin. The alleged victims were practioners of Falun Gong - deemed by the state an illegal religious organization. By the time, he arrived, Gao said many were already dead.

‘A mother and son died in police custody within 10 days of each other,’ he says. ‘Police told the boy’s father he had committed suicide by jumping from a window, but they wouldn’t let him see the scene of death or the body. They still have the corpse more than a month later. It is disgraceful.’

He has written a series of open letters to Chinese president Hu Jintao and the prime minister, Wen Jiabao. ‘I advised them to leave the Communist party. It is not capable of reform. History teaches us that no dictatorship can last forever. One day, those with blood on their hands will face a people’s trial.’

His grim analysis has a lot more takers now than in 2003, the year Hu and Wen took power amid hopes of reforms to bring the political system in line with the dramatic changes in the economy. But if anything, the crackdown on liberals, journalists, internet dissidents and lawyers has intensified since.

Many in the outside world argue that political liberalization will follow automatically with increased affluence. One is Tony Blair, who said there was ‘unstoppable momentum’ towards greater political freedom. Gao said such an argument was just an excuse for the west to trade with a human rights violator.

But he reserved his fiercest criticism for the two European countries that have done most to build close relations with Beijing: ‘Many Chinese people think the governments of France and Germany are as terrible as ours. They are only acting in their self-interest and making a fortune out of the misery of the Chinese people. There will be a price to pay one day for the so-called civilized foreign governments who are honeymooning with the Communist party. I want people in the outside world to understand the situation in China. We face a party with millions of troops. I have dozens of plainclothes police around my home. It is hard to use words like understanding and forgiveness with them.’

The fact that Gao is still free is perhaps the government’s best defense against the lawyer’s most strident accusations. Twenty years ago, such an anti-government tirade would have quickly resulted in imprisonment or death. Gao believes he has been left at semi-liberty because the authorities are worried about domestic protests and an international outcry if he is arrested.

‘They threaten to arrest me and I say, "Go ahead,"’ he says. ‘I am a warrior who does not care whether I live or die. Such a sacrifice will be nothing to me if it speeds the death of this dictatorship.’
Posted by MaKina at 4:01 PM