The freedom to blog 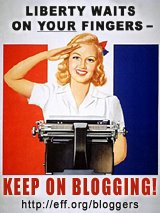 The freedom to blog

L.A. Times, 10 Jan. 2006 - After Microsoft shut down a popular Chinese-language blog recently, a barrage of anti-Microsoft messages began zinging around the blogosphere in China. One of them took that famous photo of a lone student blocking a line of tanks near Tiananmen Square and superimposed the Microsoft logo on each tank.

Such an image is unlikely to improve Microsoft's reputation in China. It may even be more damaging to its prospects than irritating China's propaganda ministry, gatekeeper of all information-based business and the minder that Microsoft and other Western media companies are constantly trying to please.

Doing business in China requires flexibility. The law, where it exists, is often irrelevant; it is the decision-making of individual officials that matters. Western businesses sometimes have to bend over backward to please officials in order to secure access to China's enormous market. Sometimes they go too far — and this appears to be one of those times.

Late last month, Microsoft deleted a blog from the MSN online service after the author, a Chinese journalist using the name "Anti," applauded striking journalists at the Beijing News who were protesting the firing of their independent-minded editor. A strike at a Beijing newspaper is not a common event. But it is not a politically incendiary one, nor was it secret, having been widely reported on the Internet.

China's Communist Party believes in the control of information. Yet it has steadily undercut that control by pushing economic change, effectively deciding that more information is OK if it means a broad rise in living standards. As a result, young people in China today have access to almost the same Internet as young people in any other country.

That has not stopped China's authorities from trying to limit access to information that doesn't serve their goals. They still deploy more than 30,000 tech-savvy police to monitor e-mail and block selected websites, often the ones with words such as "democracy" in their title. In a few cases, they have jailed Internet users who spread items considered anti-government. More than anything, China's Internet police provide their leaders with the impression that they have some modicum of control over an unwieldy landscape. That is their prerogative.

However, U.S. companies such as Microsoft, Yahoo and Google have a responsibility to their shareholders to stand up for the profitable operation of their businesses in China. Trying to anticipate every concern of the propaganda ministry is no way to win long-term customers. Fighting for the right to conduct business fairly and reasonably is the mark of every Western company that has succeeded in China.

U.S. companies also have an obligation, as leaders in a global medium defined by open information, to protect basic rights of individuals to express themselves without censorship — within reason.

"Within reason" are the key words here. It is within reason for China to demand that U.S. companies comply with Chinese laws and regulations. What is not within reason is a Chinese demand for compliance with unwritten whims.

In a December 26, 2005 piece the San Francisco Chronicle reported on the continued, and perhaps growing, involvement of high-tech U.S. companies in the suppression of free speech in China. The piece writes that, “U.S. tech giants are helping the Chinese express themselves online--as long as they don't write about democracy, Tibet, sex, Tiananmen Square, Falun Gong, government corruption or any other taboo subject.” (As reported in past FDI releases, a number of Falun Gong are serving prison terms for visiting Web sites deemed by Chinese authorities “subversive.”)

The Chronicle reports that even words such as “democracy” and “Dalai Lama” are banned, for example, by Microsoft’s Chinese blog site. Yahoo meanwhile proved complicit in the recent arrest and jailing of one foreign correspondent in China. U.S. corporations have become active players in the control of expression in China by providing authorities with surveillance technologies, search filters, blocking tools, and other technologies of control.

Concern over U.S. involvement appears to be growing. “Critics say that cooperating with governments to suppress free speech violates human rights, international law and corporate ethics… Both human rights groups and academics reject the companies’ argument that they have no choice but to follow local laws where they do business,” the piece reports. One source, Director of the doctoral program in ethics and law at the University of Pennsylvania’s Wharton School of Business, Professor Tom Donaldson, compares “tech companies helping China squelch free speech with Polaroid’s providing photographic technology for the passport system used under South African apartheid to control the movements of black citizens…” and has suggested “that what Yahoo, Microsoft and others are accused of doing is worse than merely selling technology to corrupt governments.”
Posted by MaKina at 12:17 AM