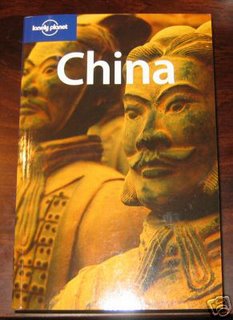 The great wall around bookstores finally appears to be coming down

Globe and Mail: 06 Jan. 2006 - Like a lot of things over here, Chinese bookstores have traditionally come in one size only: massive, and state-owned. Try strolling into the Wangfujing Bookstore -- a gigantic six-floor monstrosity on a popular shopping street in downtown Beijing, not far from Tiananmen Square. It sells everything from computers to pianos, but most of its floor space is crammed full with thousands of book titles. And as China moves into the global economy, a surprisingly large number of English-language books can be found in the store. There is an entire shelf filled with Lonely Planet travel guidebooks, for example. But there is one obvious gap on that shelf. The Lonely Planet guidebook on China is conspicuously absent. Ask a clerk for it, and the answer comes back swiftly: No.

The clerks don't even bother to check their records. They get lots of requests for Lonely Planet China, and they know it is banned. It contains too many paragraphs on forbidden subjects such as the Dalai Lama and the Tiananmen Square massacre. t's a small reminder of the difficulties of doing business in sensitive industries in China, despite all the talk about its growing openness and its booming economy. If you judge by official pronouncements, China should be a happy hunting ground for the world's book retailing and wholesaling companies. After all, Beijing announced in December, 2004, that it was removing all restrictions on foreign and private retailers and distributors in its $8-billion (U.S.) book industry, ahead of the formal schedule of its commitments to the World Trade Organization. What could be better? China's doors seemed to be thrown wide open. Look a little deeper, however, and the reality is a lot less rosy. Like a lot of other industries, the book sector is proof that China's fine-sounding promises to WTO can be subverted by the lingering reflexes of its stifling bureaucracy. Even after its 2004 announcement that foreign companies could enter the book business, only a tiny handful of Western investors have managed to enter. Applications have taken up to 12 months to gain approval. And even those who succeeded in setting up retail shops are often obliged to operate below the radar, quietly selling books that never actually get formal approval from the Communist authorities.

Most of the foreign retailers are unwilling to talk publicly about their operations. "The government is very reluctant to open up this sector," said Jo Lusby, general manager of the newly opened China office of the Penguin book group. "It's been a very slow turnaround to get applications approved. It sounds so easy on paper -- but as with everything in China it's not as simple as it appears. This is an area of great sensitivity to the government. Imports of books are still very firmly controlled." Despite WTO and the elimination of official restrictions, foreign book retailers in China are still tightly controlled by a web of rules for business licences and other permits. There are minimum requirements for floor space and registered capital, which favour the bigger chains. "A bigger company is typically more willing to toe the government line," Ms. Lusby said. "The government doesn't want to encourage the independents."

The Chinese book industry is still dominated by state-owned stores, which control more than half of the market. This is not a normal industry. Instead of responding to the demands of consumers, the book stores must follow the whims of the state-owned distributors and importers. The wishes of the consumers are almost irrelevant. When it comes to foreign books of any kind, the retailers are still at the mercy of the importers.

"In the past, a publisher would seldom ask a book store what they wanted," Ms. Lusby said. "You had to persuade the importers. The importers held the whip hand. It was like a famine, and the customers were happy with any book." But while 2005 was a slow year for the foreign investors as they struggled to understand China's rules and regulations, there are signs that 2006 could be better. The book importers are starting to become more adventurous. The restrictions seem to be loosening. And a growing number of book retailers are beginning to learn Western-style promotional strategies.

Penguin has already seen the first benefits of this trend. Its sales of English-language books in China jumped by 200 per cent last year. "The famine is over," Ms. Lusby said. "When retailers see how others are becoming commercially successful, things will perk up. This year could be a really good year." The massive Wangfujing book store is again an example of these trends. A stroll through its English-language shelves this week found a growing diversity of books and some unexpected titles -- including a book criticizing the Three Gorges Dam and an international politics textbook that openly discusses banned subjects such as the Falun Gong religious sect and the Tiananmen massacre. There are even rumours that some customers have managed to purchase under-the-counter copies of the Lonely Planet guidebook to China, wrapped in brown paper to conceal its identity.
Posted by MaKina at 12:00 AM