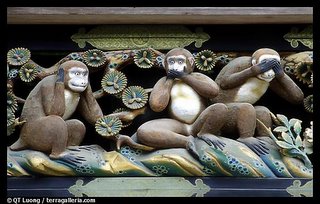 Hu Jintao's Theory of the Three Harmonies
by Willy Lam

China Brief Vol. 6, Issue 1: 03 Jan. 2006 - Call it the “Theory of the Three Harmonies.” Three years after assuming power, President Hu Jintao has concocted the one slogan that his publicists hope will best sum up the statecraft of the Fourth Generation leadership: he-ping, he-jie and he-xie. This “triple he [harmony]” can be rendered as “seeking peace in the world, reconciliation with Taiwan, and harmony in Chinese society.”

Hu and long-time ally Premier Wen Jiabao have been digging deep into the Communist-Chinese canon as well as ancient Confucian classics to generate a pithy motto to replace ex-president Jiang Zemin’s embarrassingly obtuse dictum, “the Theory of the Three Represents.” Coined by Jiang and his advisers during the last segment of his 13-year rule, the “Three Represents” shibboleth—that the Chinese Communist Party (CCP) represents the highest level of productivity, the foremost culture and the people’s interests”—is widely seen as an elitist rallying cry to justify the empowerment of the “new class” of cadre-entrepreneurs. After taking over first the party leadership and then the chairmanship of the Central Military Commission (CMC), Hu is anxious to render the Hu-Wen team more appealing to the general populace. The important question is, of course, whether the “Theory of the Three Harmonies” will enable the CCP to mend its somewhat tattered mandate of heaven.

In marathon diplomatic forays the last two months of 2005, Hu, Wen and other senior Politburo members have told audiences around the world of Beijing’s commitment to the “peaceful rise” of China. Moreover, given that the pro-independence Democratic Progressive Party was badly bludgeoned in last month’s mayoral and county-level polls in Taiwan, the CCP leadership is anxious to expand its united front tactics and “smile diplomacy” toward the opposition Nationalist Party as well as business magnates in the “breakaway province.” Yet the focus of Hu watchers has been on the crucial element of the promotion of “social harmony.” Just going by reports in the Chinese and international media, the number of demonstrations and riots staged in 2005 by members of “disadvantaged sectors” such as disgruntled peasants would likely exceed the 74,000 cases that occurred in 2004. There are also disturbing signs that both central and provincial leaders have given orders to the police as well as the para-military People’s Armed Police (PAP) to use brute force if necessary to crush the seeds of revolt. Thus an estimated 30 peasants were shot dead by PAP officers during a confrontation in the farming and fishing village of Dongzhou, Guangdong Province last month. Dongzhou residents were protesting against the construction of a power plant, which would damage the environment and result in the forced eviction of thousands of residents.

Sources close to the Hu camp said the 63-year-old president—who has been widely criticized for cracking the whip on intellectuals, journalists and restive peasants—wanted to boost his domestic and international standing by echoing the liberal ethos associated with his mentor Hu Yaobang, the late CCP general secretary and leader of the Communist Youth League (CYL). Hu Yaobang, who was instrumental in making Hu Jintao CYL boss in the early 1980s, is still fondly remembered for his “Theory of the Three Tolerances.” The latter dictum—kuan-song, kuan-hou and kuan-rong [“leniency, generosity and tolerance”]—was the leitmotif of the five-year “Beijing spring” that reigned, albeit on a sporadic basis, in the Chinese capital in the run-up to the 1989 Tiananmen Square massacre. An innovative theoretician, Hu Yaobang had advocated bold departures from Marxist-Leninist dogma and the allowance of party and government policy to reflect the real wishes of intellectuals and proletariats alike.

Obviously, neither Hu nor Wen intend to push forward the ideological liberalization movement begun by the late Hu and other early-generation CYL chieftains such as another disgraced Politburo member Hu Qili. Yet since gaining power at the 16th CCP Congress in late 2002, both Hu and Wen have presented themselves as “people-caring sage-emperors” in the mold of Confucius’ ideal, humanistic rulers. Indeed, many of Hu and Wen’s slogans, including “putting people first,” “running the administration for the sake of the people,” and “seeking harmony in the midst of differences” are pulled right out of the teachings of Confucius and like-minded sages such as Mencius.

It cannot be denied that compared with administrations under Jiang and Deng, the Hu-Wen team has paid more attention—and lavished more resources—on disadvantaged groups such as retired workers or peasants. For example, Beijing last week announced the abolition of all rural taxes by the end of 2006, a move that would save rural residents up to 100 billion yuan. Moreover, Wen’s State Council indicated that 218 billion yuan would be spent on rural education during the 11th Five-Year Plan of 2006-2010. The question remains, however, whether the Hu-Wen team has stuck to a top-down, noblesse oblige type of “Confucianist authoritarianism,” whereby leaders dispense largesse from on-high while denying the masses any meaningful chance of participation in governance. To this day, the Hu leadership has refused to let farmers and workers form independent trade unions or other types of non-party-controlled political or economic organizations.

In a way, the one area that Hu Jintao may have done Hu Yaobang the proudest may be the elevation of dozens of CYL alumnae to senior party and State Council posts. Despite barely concealed opposition from the remnant affiliates of the Jiang or Shanghai Faction, Hu’s CYL followers are expected to grab the lion’s share of new party and government slots to be opened up at the 17th CCP Congress scheduled for next year. This is despite widely held reservations by cadres outside of the CYL Faction that quite a number of Hu protégés are career party affairs specialists who have dubious qualifications for portfolios ranging from finance and foreign trade to legal and judicial affairs.

Diplomatic analysts in Beijing said Hu since early 2005 has spent considerable time on consolidating his hold over the People’s Liberation Army (PLA), perhaps the only sector of the body politic that still escapes his domination. One of Deng Xiaoping’s lasting legacies is the late patriarch’s instructions to younger colleagues, including ex-president Jiang and Hu, that political stability in the country can only be ensured if the “CCP has absolute leadership over the army.” Hu, in fact, understands only too well that a key reason why the late Hu could be so easily removed from power in early 1987 was that the latter had no clout in the PLA whatsoever.

Hu’s task, however, has been made difficult by the fact that Jiang, who was CMC chief for nearly 15 years, had until the very last moment insisted on having the final say on senior-level appointments. In the past two months, however, the new CMC Chairman has demonstrated a firmer grip on military affairs by masterminding a series of personnel changes within the top brass. Given that unlike Deng, Hu had never been a professional soldier, the new commander-in-chief lacks a solid corps of loyalists among senior military officers.

Hu has resorted to mainly two tactics to build up his credentials as a commander-in-chief that passes muster. The first is to elevate the sons of First- and Second-Generation revolutionaries to senior PLA slots. For example, Gen. Liu Yuan, son of former state president Liu Shaoqi, was late last year promoted Political Commissar of the Academy of Military Sciences. Moreover, Gen. Zhang Haiyang, the son of retired general and former Politburo member Zhang Zhen, was made Political Commissar of the important Chengdu Military Region. Tradition matters in the PLA, and Hu garners goodwill and support by giving preference to the offspring of respected state and army leaders.

The new CMC chief has also tried to boost his standing by inducting more officers from the navy and the air force into the three PLA headquarter departments, namely, the General Staff Department (GSD), General Political Department (GPD) and the General Logistics Department (GLD). Traditionally, generals from the ground forces have monopolized most of the posts of these three top units. Hu’s structural reform has endeared himself to the navy and the air force—which have become the mainstay of China’s power projection in the new century. For instance, Air Force Generals Liu Zhenqi and Li Maifu were last month installed respectively as GPD Deputy Director and GLD Deputy Director, while General Tong Shiping, from the navy, was made GPD Assistant Director.

In the final analysis, Hu and Wen understand that a regime cannot last if it depends solely on the ruthless efficacy of its control mechanisms, which in China’s case include the PLA, PAP, the secret police and the regular police. Yet the risk-averse Hu is loathe to arouse false expectations among the nation’s intelligentsia by going all out in his emulation of Hu Yaobang’s “Theory of the Three Tolerances.” Plans mooted earlier this year by his aides, such as allowing a dozen-odd of the less controversial Tiananmen Square-related exiled dissidents to return to China, have been abandoned. It will not be surprising, then, that perhaps for the rest of the decade, Chinese society will only exude a kind of artificial, party-sanctioned harmony that endures at the pleasure of New Strongman Hu.