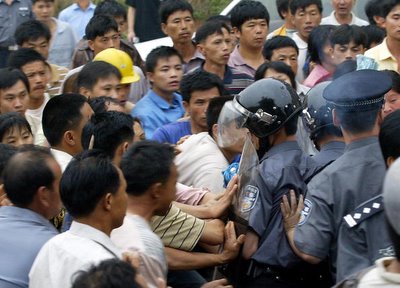 Thousands of Chinese villagers clash with police over land grab

Police were beating up anyone they saw ... I have not seen anything as big as this since June 4th," said another villager surnamed Tan.

The villager was referring to the police force used to quell the six-week Tiananmen Square democracy protests in Bejiing in 1989, in which hundreds, if not thousands, of unarmed protestors and bystanders were killed.

More than 30 people were seen taken to hospitals in ambulances after being beaten by regular and military police, Tan said.

A staff member at the Sanjiao township People's Hospital confirmed to a reporter that injured residents from Panlong village were sent there for treatment, but hung up the telephone when asked how many were admitted.

Police in Zhongshan city earlier Saturday confirmed that the protests started on Wednesday but refused to give more details.

"Yes, it happened. But we are not sure about the number of people involved," a duty officer surnamed Chen told AFP earlier.

Various accounts from villagers put the number of protestors between 1,000 and 3,000 during the demonstrations earlier this week. They said the numbers dwindled later in the week after police armed with batons beat people.

But more and more villagers started joining the protests again during the weekend on the Nansan motorway and police took to force again late Saturday to disperse the crowd, the villagers said.

Villagers had started a sit-in protest outside the Sanjiao township government office over inadequate compensation for farmland forcibly taken from them. When their pleas went unanswered, they started blocking the Nansan motorway.

"That used to be our land, so it was reasonable for villagers to re-occupy their own land," said the villager who did not want to be named.

"People are so angry," he said. "People have hardly enough to live on and the local officials have millions (of yuan) in their own accounts."

Villagers said the local government had started selling their farmland to companies more than 10 years ago but had given each villager just 400 to 700 yuan (49 to 86 dollars) per year in compensation.

They said they had put up with it for years but that the money was not enough to live on with the rapid price rises in China in recent years.

"How can we live on that in this day and age?" the villager asked. "We are unskilled farmers, we can't find proper jobs."

The villager said his family used to own three 'mu' of farmland (0.2 hectares), on which they grew sugar cane and vegetables. But the government had sold their land for 100,000 to 200,000 yuan per mu.

"As a citizen in this society, we have a duty to obey the government, but things are just getting ridiculous," he said. "What choice do we have now?"

An elderly villager surnamed Chen told AFP that police had set up road blocks around the village and were barring outsiders from entering.

As China's economy continues to race ahead, violent clashes over land requisition have become increasingly common as a result of local officials' frequent collusion with property developers.

Farmers who have had their lands confiscated for little or no compensation often have little recourse and their frustrations boil over into violent clashes with the authorities.

In the past few months alone, Guangdong province has seen several major cases of unrest.

As many as 30 protesters were shot dead by police in a confrontation in Dongzhou village last month, according to residents there.

The confrontation stemmed from the local Shanwei city government's refusal to pay villagers adequate compensation for taking their land to build a coal-fired power plant, which will also threaten their income from fishing.

In another incident widely regarded as a test case for village democracy, residents of Taishi village, Panyu city, clashed with authorities as they tried to unseat the local village chief whom they accused of illegally selling village land.

The dispute turned violent last summer when police roughed up and detained scores of villagers and activists.
Posted by MaKina at 3:21 PM