US-based Uyghur Lashes Out at Pressure to Spy for China 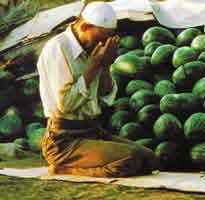 "US-Based Uyghur Lashes Out at Pressure To Spy for China

Radio Free Asia, Washington: 05 Jan. 2006 - A U.S.-based member of the Muslim Uyghur ethnic group, many of whom reject China’s rule over their traditional homeland, has lashed out at Chinese officials he says are holding his family under house arrest to pressure him into spying for them.

“In the last 10 years, my children have been living under house arrest...and the government did not issue them passports,” Uyghur businessman Parhat Yasin told RFA’s Uyghur service.

“The secret police of the State Security Bureau have phoned me many times to work for them. They said they would let my children go if I work for them,” he said.

Parhat recorded two phone conversations with unidentified people speaking Uyghur, who urged him to spy on exiled Uyghurs in the United States, in return for the release overseas of his family.

Leading Uyghur dissident Rebiya Kadeer has said she was told her children would be “finished” if she engaged in political activity following her early release from prison and exile to the United States in 2005.

Parhat, who gained U.S. political asylum 10 years ago and is now a U.S. permanent resident, said the calls began in 2004 with a Chinese-speaking State Security Bureau official in his hometown of Ghulja, who identified himself by his surname, Cheng.

After Parhat asked for a fluent Uyghur speaker, two other people called, identifying themselves as “Xue Ma” and as “Nurtay.”

In one call recorded in the first half of 2004, Xue Ma tells Parhat: “I will start processing your wife and children’s passports soon...Then, you work. Work for us.”

Parhat refuses. “No work. I cannot see you processing the passport. I will start working the day when my family arrives here,” he tells Xue Ma.

In the second call, recorded on July 12, 2004, Nurtay repeats the offer, putting pressure on Parhat to travel to Canada or Mexico to meet Chinese agents.

“Have you thought about your children?” Nurtay says, on hearing Parhat is considering a divorce from his wife. “There is no point talking rubbish—that is what we think.”

“As we discussed last time, why not find a way to meet in person? You find a way to come to Canada or another neighboring country of America like Mexico. Then we can go there,” he says.

When Parhat refuses once more, Nurtay asks if he knows how to use a computer to write in Uyghur. Parhat says he does, asking what Nurtay wants from him.

“Things…like, you send us. Then we will let your wife and children out....the activities of the Uyghur American Association to us,” Nurtay says, and Parhat refuses once more.

In an interview given at the same time, Parhat said he was outraged at the Chinese government’s interference in his private life and vowed to launch a “petition” against the officials concerned, without specifying further.

"It has been 10 years, and I’ve reached my limit,” Parhat said in the interview. “They have interfered with my personal life. For this, I will not give up and I will file a petition. I am so determined that I will pay any price to get results on this.”

Exiled Uyghur sources within the United States say such phone calls have become increasingly common since China declared its own “war on terror” against Uyghur separatists in the wake of the Sept. 11, 2001 terror attacks.

Exiles in several countries from different cities have been targeted, with special pressure put on those whose families remain in Xinjiang, the sources said.

Uyghurs constitute a distinct, Turkic-speaking, Muslim minority in northwestern China and Central Asia. They declared a short-lived East Turkestan Republic in Xinjiang in the late 1930s and 40s but have remained under Beijing’s control since 1949.

According to official figures published in 2001, the Xinjiang Uyghur Autonomous Region comprised 8.7 million Uyghurs, or 47 percent of the population, while Han Chinese accounted for 7.5 million residents, or 40.6 percent. Other groups accounted for 2 .3 million, or 12.39 percent.
Posted by MaKina at 12:40 AM