China's Pregnant Guerillas Pay the Price for a Second Child 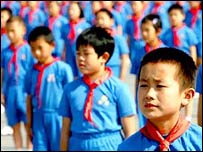 China's "pregnant guerillas" pay the price for a second child

Asia Pacific Post: 22 Dec. 2005 - Having a baby boy is a cause for celebration among rural Chinese families, but the birth of Hu Jiapeng to a family in Hunan province illustrates the enormous human cost it involved.

“It was just because I flouted the ‘one-child policy‘ in our country. I already had a one and half year old daughter, Hu Jiamei,“ Hu said, according to the South China Morning Post.

“My boss, the director of the bureau, even lost his qualification to run for vice mayor of Liuyang city after my son‘s birth.

“He was accused of neglect of duty because he failed to stop me from having a second child.“

According to the regulations of Hunan Provincial Family Planning Commission, leaders of all government organs are responsible for ensuring the implementation of the one-child policy. Failure to do so means lost promotions and no bonuses.

But Hu does not regret the action he and his wife, Zhang Yulan, have taken.

“Compared with my wife, all the losses are nothing,“ he said. “She suffered much more than me or my colleagues.“

Zhang, 26, is a typical “pregnant guerilla,“ the mainland term for women who contravene the one-child policy. She almost lost her life while on the run from a forced abortion.

Her trials began after an ultrasound revealed she was carrying a boy.

“To be the wife of a farmer family, I have the responsibility to give birth to a boy,“ she said.

To hide her pregnancy from Hunan officials, Zhang left her family to live in a string of farmers‘ homes in neighbouring Jiangxi for five months. But at eight months, she was caught and sent to Liuyang People‘s Hospital for a forced abortion.

“In order to save my boy, I fled from the operation table and ran away alone with my potbelly and bare feet to Jiangxi when my family raised a ruckus at the hospital,“ she said. “To avoid being recaptured, I gave birth one month early through Caesarean section in a small clinic because no hospital in Hunan would have dared to accept me.“

The couple also lost their party memberships after the birth of their son.

Tests to reveal the gender of an embryo are banned on the mainland but remain popular, with many farmer families having the tests carried out in secret at a cost of hundreds of yuan.

Under the one child policy, in force since the mid1970s, couples in urban areas are allowed only one child. Farmers can have a second child, four years later, if their first child is a girl.

According to the United Nations, the mainland‘s population would be 100 million greater if the policy had not been adopted.

Forced abortion has become a tactic authorities use in some rural areas, where birth control results are a key factor in the promotion prospects of officials.

Another 26 year old couple, Tang Jian and Liu Guixiang from Cangfang village in Hunan, were victims of the one-child policy.

Liu was forced to abort her eight month old fetus by local family planning officials in January when she was also caught hiding in Jiangxi.

“We are entitled to have a second child because our first child is a girl. But my wife was pregnant when my daughter was only three years old, not four,“ Tang said.

Liu said that the medical officials would only stop an abortion if an expectant mother was in labour.

Peking University Population Research Institute professor Lu Jiehua said it was illegal for the Liuyang officials to interfere in the pregnancy at such a late stage.

He blamed the practice on the imperfect retirement system in rural areas, where traditional thinking emphasises “raising sons to support old age“.

“The lack of comprehensive social support for senior citizens, especially in rural areas, has to be blamed,” he said.
Posted by MaKina at 3:59 PM

Jeepers. This is even worse than I thought it could be. On these "forced abortions" at eight months, what happens to the babies? Are they left to starve and die?

I suspect that the baby goes in the trash or is cremated. They will even do abortions at nine months by injecting a poisoned needle in the mother's belly.

On one of her trips to China, my friend spotted a decapitated baby in the gutter one day, probably a girl, and mentioned it to a shop owner who said for her to forget she ever saw the baby. Why am I not surprised?

People have forgotten the meaning of
right and wrong, good and bad as they've been told all their lives by the CCP 'what to do and what to believe in' They've had to believe in the Party(CCP)... or else.

But the truth is out about the real nature of the Party with the Nine Commentaries spreading everywhere in China. Finally Chinese people can learn more about the past history and crimes of the CCP against their own people. So they have a chance to make a personal choice about their own future...to quit or not to quit the Party. That is what they have to come to terms with. The Party is not good for the Chinese people as you can see and is very corrupt.

Yes this his horrible. Now I have a question regarding this:

“To be the wife of a farmer family, I have the responsibility to give birth to a boy,“ she said.

Why? Isn't this a crooked notion itself?

That's how the Communist Party operates -- every policy is as crooked as could be and goes against human nature. What is really awful in all this is that it looks like the UN is justifying this killing by mentioning that without this one child-policy there would be that many more people in China...really pathetic.

The CCP's discrimination about women is not rational. My guess is that the CCP probably assumed that females are incapable of doing as much hard labour than men and in China males are in charge of looking after their family members. And because of this absurd inhumane policy there is a big shortage of women in China and many men are looking for wives to marry and there are not many left.

Basically the CCP has no respect for human lives--look at the way they torture and imprison religious groups, journalists, dissidents and internet users, etc.

It looks like the only living thing the CCP respects is pandas! Apparently killing pandas in China is a capital crime--but killing babies is OK by the 'rule of law' of the CCP.