Commentary: The Chinese have become a conquered people 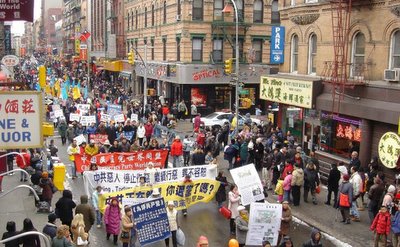 The Chinese Have Become a Conquered People
By Yuan Hongbin at the Nine Commentaries Forum in Sydney, Australia

Epoch Times: 12 Jan. 2006 - On the afternoon of January 7, a forum on the Nine Commentaries on the Communist Party was held at the Parramatta Town Hall, located west of Sydney. Honored guests and attendees participated in discussions centered on the theme "The Truth Behind the Rise of China." Some even shared personal experiences and exposed secrets behind the reign of the Chinese Communist Party (CCP).

Law professor Yuan Hongbin startled the audience when he pointed out that Chinese people have become a conquered people. The following is his unabridged speech.

"We live on our land yet we do not have freedom of thought, freedom of speech or freedom of belief. In our homeland, we have suffered humiliation and mistreatment and have been robbed of a citizen's dignity. The underlying cause is that China no longer belongs to the Chinese people. China has become the political and ideological colony of Marxism. In a spiritual and authoritative sense, the Chinese are subjugated people.

"The Chinese Constitution clearly states that Marxism must be the guiding ideology of the 1.3 billion people. What does this imply? It means that this country is to use barbaric measures to compel each citizen to bow down before an alien ideology.

"Some say Jews are one of the most long-suffering peoples in the world, because they had lost their motherland within several thousand years. Without their motherland, they knew they were a conquered people. Despite spreading around the world, they still had faith that they must resurrect their country. The deeper their humiliation and anguish at the loss of their motherland, the stronger their will to rebuild the country they had. After the World War Two, the sufferings of Jews touched the conscience of all human beings, and the United Nations agreed to help the Jews rebuild their nation. Once a nationality has lost its motherland, it loses its homeland of emotions, mind and human dignity.

"For the Chinese, the story is even sadder than that of the Jews for we do not yet realize that we have become a conquered people. China is now a political and ideological colony of Marxism. Those who rule China are not the sons and daughters of the Chinese nation, but the descendants of Marxism-Lenism. Despite their Chinese faces, they have already sold their souls to the evil theory based on hatred and violence originating from Germany.

"Hence, every Chinese of conscience who still loves his or her motherland is facing a serious national undertaking. The revival of our country is, in essence, to drive Marxism-Lenism out of our minds and restore the Chinese nation. If we cannot regain the mother country that belongs to us Chinese, we will never have freedom of thoughts, belief and basic rights as a human, because a subjugated people have rights to nothing but humiliation.

"Today's so-called rise of China actually has nothing to do with China; it is the rise of the Chinese Communist regime; a regime that is the most murderous, most evil tyranny in human history. Such a rise can only mean the more grave the sufferings and the greater the disasters that will be foist upon the Chinese people."
Posted by MaKina at 12:27 AM