How China 'made' Yao Ming 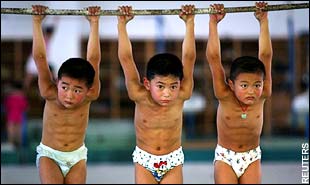 HONG KONG (AFP) 19 Jan. 2006: Far from being a chance creation, Chinese basketball giant Yao Ming was knowingly bred for the sport, forced into it against his will and subjected to years of dubious science to increase his height, a new book claims.

The 1.98m Houston Rockets centre also underwent years of punishing training as one of hundreds of thousands of potential Chinese athletes who endure miserable childhoods in boot-camp conditions.

The revelations in “Operation Yao Ming”, by former Newsweek journalist Brook Larmer, are likely to raise further disquiet over China’s Soviet-style sports system ahead of the 2008 Beijing Olympics.

Larmer said Yao Ming, China’s first successful basketball export and its most famous face worldwide, was the product of a harsh and antiquated programme which has changed little since it was set up more than 50 years ago under Mao Zedong.

“Yao Ming on one hand is this great symbol of China’s modern advancement, a commercial icon that can stride across the Pacific and play the role of a bridge between East and West,” he said. “But he’s still the product of this system which is one of the last bastions of socialism in China.”

Larmer says Yao Ming’s birth had been anticipated for decades by Communist officials – desperate to boost national pride through sports – who had been tracking his family for two generations.

“It’s no accident that there have been generations of players who have continued to get taller,” he said. “One of the first NBA scouts was blown away when he went to northern China and saw more than 20 seven-footers.”

Yao Ming’s grandfather, one of Shanghai’s tallest men, was discovered too late for basketball but his son, the six-foot-nine Yao Zhiyuan, soon found himself dragged into the sports system.

There he was paired off with the six-foot-two Fang Fengdi, China’s women’s captain who had been a feared Red Guard during the Cultural Revolution.

The two were encouraged to marry in a system with undertones of eugenics, the controversial gene-pool manipulation espoused by the Nazis and previously trumpeted by Beijing.

“It wasn’t a national breeding programme, it was a desire among Shanghai officials for them to get together,” Larmer said. “But when Yao Ming was born everybody in the sports community in Shanghai and nationally knew he was something special.”

The giant infant, who was just eight years old when he reached the average Chinese male’s height of five-foot-seven, was recruited for basketball despite his parents’ objections and his own hatred for the sport.

“Even when his parents resisted at first to put him in the same system that had caused them some suffering and bitterness, there was not a lot of choice,” Larmer said.

“He hated the game for a decade. He didn’t like it, he wasn’t any good at it.”

The eight-year-old Yao Ming embarked on a programme of intense, repetitive training under disciplinarian coaches who offered little encouragement or variety.

Meanwhile scientists fed him a steady stream of mysterious concoctions designed to make him taller, raising the spectre of possible hormone treatment at a time when China was suffering a series of doping scandals.

“In Yao Ming’s case I don’t have any proof ... (but) in that period of time in the 1990s they were using all kids of experimental stuff to enhance players’ stamina and strength,” Larmer said.

“One would think that as China can flex its muscle economically, militarily, diplomatically, that it wouldn’t need sports as a crutch. But sport is such a visible, exciting measure for China’s position in the world, and national feeling is so strong, I don’t think that’s going to be easy to give up,” he said.

“Gold medals have become an addiction. How do you kick the habit when you’ve reached the top?”

Related Article: BBC: Pinsent shocked by China training
Posted by MaKina at 12:20 AM

Oh! I forgot to mention...although I appreciate the caricature I will stick to the picture that shows the 5-year old boys training to become great athletes.

This type of intensive training is a more than painful experience for young children to go through and should be stopped.

The incentive behind this as I see it, is that China wants to collect as much glory as possible via Olympics Medals so that they will be more accepted by the Western World--therefore attract more investors. It's a kind of 'posturing for trade'--everthing the Chinese dictators do has to do with gathering more money and more power at the expense of their helpless citizens who have to obey faithfully or else...they lose their jobs or end up in jail, labour camps, etc.

Cruel sport is where they're at in this respect.