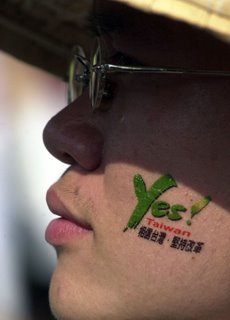 ■ Defense Arms deal necessary: MND
Vice Minister of National Defense Michael Tsai (蔡明憲) yesterday called on the people to support the government's arms procurement plan, saying Taiwan must beef up its defense and counterattack capability in the face of China's continued military buildup. Tsai made the remarks while giving a speech on "national defense, trade and cross-Taiwan Strait relations" in Taichung City. Tsai pointed out that the international community generally agrees that there are three regions of crisis in the world: the Middle East, the Korean Peninsula and the Taiwan Strait. While China's defense budget is enjoying double-digit growth every year, the number of missiles deployed by the Chinese military targeting Taiwan has risen to more than 600 and is increasing by 60 to 70 per year, Tsai said. With defense spending as a share of the national budget declining year after year, the Ministry of National Defense has put forth a special budget proposal for the NT$610.8 billion (US$18.23 billion) arms procurement, Tsai noted. Tsai argued that Taiwan must keep its military capability strong to maintain cross-strait peace and that the military balance across the Strait in the past managed to deter China from invading Taiwan.

■ Energy
CPC to build gas tankers
Taiwan's state-run Chinese Petroleum Corp (CPC) is planning to build four tankers to deliver liquefied natural gas from Qatar to the Taiwan Power Company's Tatan power plant, CPC officials said yesterday. The tankers are estimated to cost US$600 million and the CPC will invite tenders from shipbuilders later this year, the officials said. In addition to the CPC, the liquefied natural gas supplier in Qatar has expressed an interest in the project, they said. The CPC, the liquefied natural gas supplier and the shipbuilder winning the tender will form a partnership that will be in charge of building the ships, arranging the shipping schedule as well as managing and maintaining the ships, they added.

■ Diplomacy
New envoy arrives in UK
Lin Chun-yi (林俊義), Taiwan's new representative to the UK, arrived in London from Gambia to assume his post on Friday. Lin was greeted warmly at Heathrow International Airport by Taiwanese expatriates residing in the UK, as well as the staff of the Taipei Representative Office. The new representative will be briefed by office staff to learn about the London operations and will start calling on government agencies, parliament, think tanks and industrial and financial institutions next Monday. Lin holds a PhD in biology from Indiana University in the US and was a professor at Tunghai University and a member of the Environmen-tal Protection Agency before serving as ambassador to Gambia.

■ Politics
US anti-CCP march planned
About 30 Chinese groups in the US plan to stage a march in Washington today to protest against the Chinese Communist Party (CCP) and urging Chinese around the world to end communism. The march, staged to show solidarity with a campaign to end communism initiated by 60 private and human rights groups around the world, is aimed at encouraging CCP members to desert their party. Organizers of the march said the campaign was triggered by nine anti-communism articles published on an online Chinese-language weekly, the Epoch Times. They said the articles have prompted a "communism-deserting wave" in China, to the alarm of Beijing leaders.

I am working as an English teacher at the moment but am particularly interested in the effect that the Tatan power station is likely to have upon the local environment.

Please could people provide me with any information that they may have about this. Particularly with regard to its exact location and any environmental concerns.

Any help is much appreciated.