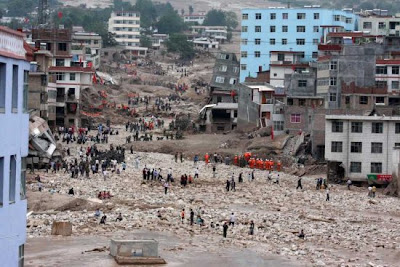 On Wednesday, the official death toll surged past one thousand, and another 600 are missing. Locals say the extent of the disaster is much worse.

Mr Tan, a Zhouqu Resident, said, “Now we’ve ascertained that at least 2,000 people have died, there are also some injured. It’s quite serious. Buildings have been flattened, and the mud has build up to two meters in some areas.”

Another resident says more than nine thousand people are missing.

But with a ban by the Chinese regime’s Central Propaganda Department on journalists visiting the area, the severity of the disaster cannot be verified.

For now, displaced resident are doing what they can to uncover the rubble.

Chinese authorities have blamed the landslides on the weather, but some experts believe hydro-dams and deforestation in the area have contributed to the disaster.