Petition to ask for explanation of transplantation figures in China 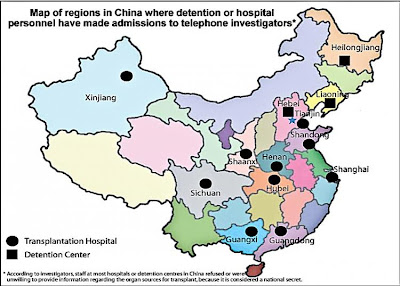 A] Doctors around the world have become increasingly aware of and particularly concerned about transplantation practices in the People's Republic of China.

B] Especially discrepancies in the transplantation figures have raised concerns that in the People's Republic of China organs are systematically harvested from unwilling living people. The Kilgour & Matas Report compiled data that in the past 7 years, more than 40,000 organ sources are unexplained. The co-authors also refer to 17 accurately documented phone interviews with Chinese doctors from different hospitals in China who admitted that organs stem from adherents of the persecuted Falun Gong movement.

C] The United Nation's Special Rapporteur on torture, Manfred Nowak, recommended in his report to the UN that the Chinese government should publish national statistics on the death penalty. He stated in his report (*), “a full explanation of the source of organ transplants would disaprove the allegation of organ harvesting of Falun Gong practitioners, particularly if they could be traced to willing donors or executed prisoners.” Mr. Nowak also reiterated the “request for an explanation for the discrepancy in the number of transplants between the years 2000 to 2005 and the numbers from identifiable sources of organs.”

We, the undersigned, are concerned that living people, in particular practitioners of Falun Gong, are abused as a living pool of donors whose organs are forcibly harvested on demand. This is in serious violation of ethical standards in medicine.

We, the undersigned, understand that a transparent and accurate documentation of the source of organs in China would on the one hand meet international standards in transplantation medicine and on the other hand respond to our concerns.

We, the undersigned, therefore ask the Chinese Minister of Health to respond to the following requests:

1. Provide accurate and transparent statistics about how many transplantations are annually performed in China to the World Health Organization (WHO), the World Medical Association (WMA) and The Transplantation Society (TTS).