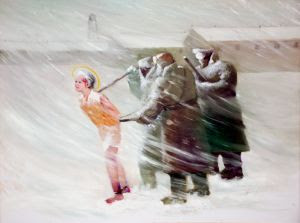 Here is part of Johnson’s prize-winning articles from a piece called A Deadly Exercise:

The day before Chen Zixiu died, her captors again demanded that she renounce her faith in Falun Dafa. Barely conscious after repeated jolts from a cattle prod, the 58-year-old stubbornly shook her head. Enraged, the local officials ordered Ms. Chen to run barefoot in the snow. Two days of torture had left her legs bruised and her short black hair matted with pus and blood, said cellmates and other prisoners who witnessed the incident. She crawled outside, vomited and collapsed. She never regained consciousness, and died on Feb. 21.

As the campaign against Falun Dafa enters its second year, many wonder how the group has withstood the government’s security onslaught. The crackdown has involved a deployment of uniformed and undercover security agents not seen since the massacre of antigovernment protesters near Tiananmen Square 11 years ago.

And here is the full series of articles that won him the Pulitzer Prize:
A Deadly Exercise
Defiant Falun Dafa Members Converge on Tiananmen
China Tells U.N. It Did No Wrong in Death of Falun Gong Member
U.N. Panel Faults China for Policies Leading to Torture
Brother Li Love
Paper Chase
Falun Dafa Members File Suit Over Crackdown Against Group
U.N. Helps Sponsor China Conference on 'Evil Cults'
A Blind Eye
Death Trap
In his book Wild Grass: Three Stories of Change in Modern China draws on three stories of individuals who have turned to the legal system to fight injustice to demonstrate his belief that the Chinese political system is under great stress -- and that major change is imminent. In vivid detail, he recounts a farmer's struggles against local officials; a Beijing resident's efforts to save his beloved old city neighborhood with the help of a lawyer; and an elderly woman's fight with the state over her practice of Falun Gong.

Johnson's most recent book "A Mosque in Munich" examines how the Muslim Brotherhood found a haven in Europe.
Posted by MaKina at 11:35 AM