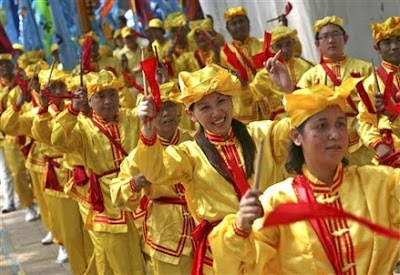 FDIC: Falun Gong is not simply on Beijing’s blacklist. Its name is recorded in the blackest of black letters, for the Chinese authorities have undertaken to crush it. Its continuing existence and growing strength are among the most prickly and difficult problems facing the authorities in Beijing today. This is not because of anything Falun Gong practitioners themselves have done. Rather, it is because of what Beijing has tried to do to them—and failed.

Until 1999 Falun Gong was simply one of many of the traditional Chinese-style disciplines that were rapidly filling the spiritual vacuum left by the collapse of genuine belief in communism, which had long sustained China’s party and many of its people. To religious believers from the West—“people of the book” above all, which is to say Jews, Christians, and Muslims—Falun Gong teachings seem unfamiliar and exotic. But anyone who knows Asian religion will instantly see that Falun Gong fits into a tradition that extends back before the beginning of recorded history. This is the tradition of disciplining the body by physical exercises that are combined with the cultivation of the mind and soul through meditation. The approach is a cousin to Buddhism and a cousin to Daoism, with elements of traditional Chinese science and medicine included as well. It is furthermore rooted in China. Unlike communism, which was invented in Europe and imported to China from the USSR, the whole Falun Gong teaching is of Chinese origin—though it has made many foreign followers. In 1999, as it became popular in China, its followers therefore sought official recognition and toleration. Read more...