The Strife of the Chinese Communist Party 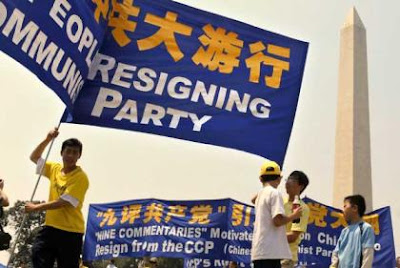 Fissures among China's elite could create openings for democratic reform.

WSJ: Then there's politburo member Bo Xilai, tipped to join the politburo standing committee in 2012 and who remains anathema to the liberals in part because of his father Bo Yibo's role in Mao's campaigns

The Chinese Communist Party has survived a dozen other things that conventional wisdom says should have doomed it—the privatization of the economy, the Internet, open denunciations of its founder Mao Zedong, a constant stream of books written by scholars and journalists in China on the horrors since 1949, the Falun Gong movement and of course the Tiananmen protests themselves. But those have all occurred at times when the party was for the most part united. Now the party will confront serious economic challenges and security questions (ranging from unsteady markets for Chinese exports to territorial disputes in the South China Sea) while divisions are spilling into the open.

Perhaps the party will survive these fissures as well. But that would make China the exception to a striking historical pattern. The Soviet Union's collapse followed the emergence of divisions with the Communist Party's leadership over Mikhail Gorbachev's opening policies, while elite differences over colonial wars in Africa brought an end to military rule in Portugal, to cite just two examples. If you believe in the uniqueness of everything Chinese, then China's growing elite conflicts may reflect a remarkably supple and effective "China model" of authoritarianism. Otherwise, history suggests they presage unmanageable differences that will one day lead to a dash for democracy. Read more