The mystery of Falun Gong 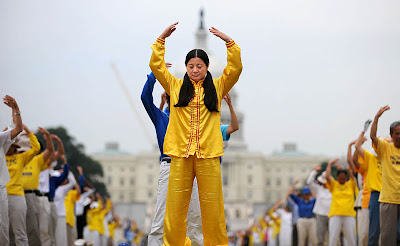 Washington Post: May 2010 - Last year, as millions of Iranians flocked online to tell stories of political repression and police violence, the world was introduced to an unlikely champion in the fight for freedom of information online: the spiritual practice Falun Gong. American practitioners of Falun Gong, it turned out, had spent nearly a decade developing and refining the most effective and widely used anti-censorship software in the world -- software that has been instrumental in the free flow of information to and from closed societies.

Who are Falun Gong and what drove them to build anti-censorship software?

The Government of China recognizes five beliefs and bans all others, including Falun Gong. Falun Gong is a modern update and blending of two religions China does recognize - Taoism and Buddhism, combined with a simple set of exercises. Of all the banned beliefs, none is treated worse than Falun Gong, banned in July 1999.

(Read more about Falun Gong at Patheos.com or faluninfo.net here)

Practitioners of Falun Gong represent two-thirds of the Chinese torture victims and half the people in detention in re-education through labour camps. The documented yearly arbitrary killings and disappearances of Falun Gong exceed by far the totals for any other victim group. According to research that David Kilgour and I have done, set out in our book Bloody Harvest, practitioners have been killed in the tens of thousands since 2001 so that their organs could be sold to patients in need of transplants.

The extremes of language the Chinese regime uses against Falun Gong are unparalleled. The Government of China has imposed a censorship blackout on independent information about Falun Gong. Chinese internet police block any mention of Falun Gong - other than their own propaganda - on websites, blogs, e-mails and search engines.

Why is this happening? One answer is the numbers. The practice of Falun Gong went from a standing start in 1992 to numbers greater than the membership of the Party within the space of seven years, spreading rapidly throughout China immediately after the Tiananmen Square massacre, the collapse of the Soviet Union and the loss of Communist Party control in Central Asia and Eastern and Central Europe.

The Party took fright at seeing Chinese nationals in the tens of millions engaging publicly in a form of exercise which had an underlying belief system completely divorced from Communism. Falun Gong is not an organization. The exercises can be done anywhere at any time, as little or as often as the practitioner wants. They can be done singly or in groups, indoors or outdoors. The amorphous nature meant that it was impossible to control.

For the Communists, victimizing the Falun Gong is a crime which is easier to get away with than victimizing other, better known groups. Falun Gong victims are often people without Western connections or Western languages.

The incitement to hatred against the Falun Gong, like all incitement to bigotry, has an impact. The Chinese Communist Party noise about the practice of Falun Gong confuses and obscures.

The problem for the Communists was not just that Falun Gong is so authentically Chinese; it is also that Communism is so patently foreign.

Communism is a Western ideological import into China. Communists saw a widespread, popular Chinese-based ideology as cutting out from under them the very ground on which they stood.

Tolerating the Falun Gong would not have meant the collapse of the current regime. But it would have meant the disappearance of whatever ideological presence the Communist Party had in the hearts and minds of the Chinese people.

Jiang Zemin, in a leaked memorandum sent to the standing members of the Political Bureau of Central Committee of the Chinese Communist Party in April 1999, wrote:

"Can't the Marxism our Communists have, the materialism, atheism we believe in really win over that suit of stuff aired by Falun Gong?"

The answer to that question, it seems, is no. Left alone, Falun Gong would have won. So the Party repressed it with a viciousness beyond compare.

David Matas, co-author of "Bloody Harvest: Organ Harvesting of Falun Gong Practitioners in China," is an international human rights lawyer based in Winnipeg, Canada, and a nominee for the 2010 Nobel Peace Prize.