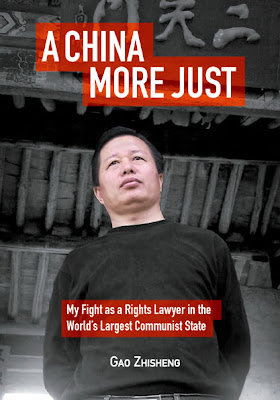 Epoch Times: Gao Zhisheng, a missing Chinese attorney, has been honored with an international human rights award from the American Bar Association (ABA). With Mr. Gao missing in China, his 17-year-old daughter Grace accepted the International Human Rights Lawyer Award on his behalf at an event held in San Francisco on Friday, Aug. 6.

Coming from an impoverished background, Mr. Gao was self-educated and would go on to be described by Chinese officials as one of China's ten best lawyers. A dedicated Christian, he was well known for his work in assisting China’s poor and marginalized but he met the wrath of Chinese state security once he began defending the rights of persecuted Falun Gong practitioners.

“Because of that work, his law license was taken from him in 2005,” said an ABA posting on the International Law Prof Blog. “In 2006, he was charged with subversion and sentenced to house arrest.

In 2007, just before the Olympics, he wrote a letter to the US Congress to explain the human rights situation. He was arrested and reportedly tortured for a period of almost 60 days,” said the ABA posting.

Mr. Gao’s current whereabouts are unknown and there are concerns for his well-being and safety. In 2007 the English translation of his memoir A China More Just was published, and in 2008 Mr. Gao was nominated for the Nobel Peace Prize.