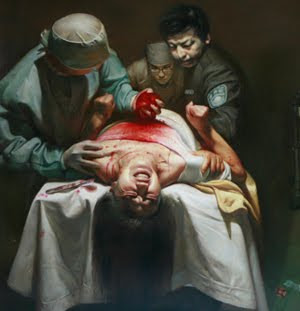 On the eve of the Int. Congress of the Transplantation Society, (TTS) DAFOH adds in its appeal to research and pharmaceutical companies to refrain from performing clinical trials in transplant medicine in the People’s Republic of China, including Amnesty International

Doctors against forced organ harvesting (DAFOH) - The regulations on clinical trials involving transplanted organs do not require pharmaceutical and research companies to investigate the source of the transplants. This practice is standard in the field and considered necessary to maintain confidentiality and double-blind status.

However, DAFOH takes the position that in order to assure ethically sustainable research, companies should refrain from performing clinical trials in which the source of the transplanted organs is due to a general lack of transparency in the organ donation system commonly not traceable, or where the organ procurement goes along with an increased risk that the involved transplants are not procured by ethical means.

DAFOH appeals to research and pharmaceutical companies to set high standards in corporate responsibility, and even exceed commonly accepted and practiced standards, and to set even better examples for ethically unassailable clinical trials by refraining from using transplants that might be legally, but not ethically acceptable.

According to transplant figures that Dr. Jiefu Huang, Vice Health Minister of the People's Republic of China, has presented at the Madrid Conference on Organ Donation and Transplantation in March 2010, approximately 60-90% of the transplantations performed in China use organs that stem from executed prisoners, and we add, might include organs that stem from Falun Gong practitioners whose organs are forcibly harvested while still alive. This goes along with a high likelihood that transplants used in clinical trials in transplantation medicine in China are actually procured in a way that is banned by ethical standards of all major medical organizations.

For this reason, DAFOH adds in its appeal to research and pharmaceutical companies to refrain from performing clinical trials in transplant medicine in the People’s Republic of China.