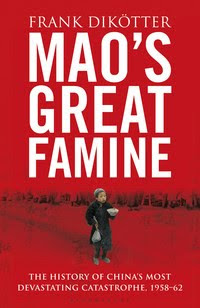 The genesis of today’s China, and of the new world order it is bringing, lies in the merciless actions of one of the bloodiest tyrants -- if not the bloodiest -- of modern times. Dikotter has done a service to history and, when they are allowed to read it, to the Chinese themselves.

Such was the efficiency of Maoist terror that no photos of the famine are known to exist, Dikotter says. Yet the facts are enough, and nothing you read will be so harrowing. The inhumanity of man, ideological man especially, scorches every page.

Edema and disease were rife. Party officials beat people to death for stealing grain from fields. They hoarded food for themselves or bartered it for sex. Roads were lined with naked, dying women and children; their last acts were to sell their rags for a mouthful of grain.

Children were sold. Cannibalism was practiced. Burial grounds were dug up and corpses used for fertilizer. People ate leaves, roots, poisonous berries, leather, stolen unripe crops and even the earth itself before succumbing.

Houses were demolished for building materials, and owners herded into collectives -- or left to live wild. Agricultural tools were melted down and “backyard furnaces” established to reach steel quotas. The steel, of course, was useless. Read more...

The Epoch Times Nine Commentaries on the Communist Party also has an accurate expose of the great famine. You can read about it in the seventh commentary.