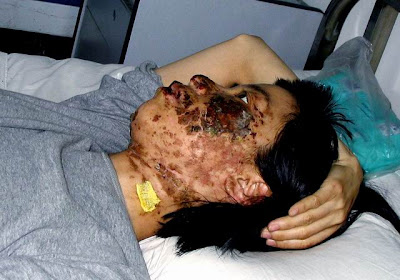 A closeup of Gao Rongrong's face disfigured by two policement who shocked her with three electric batons for seven hours burning her face to a crisp. The photo was taken 10 days later.

Compiled by the Duck Shoot: On July 20th, 1999, the former Chinese dictator Jiang Zemin launched a campaign to eliminate Falun Gong. It continues to this day. Practitioners follow the teachings of Falun Gong, which expound upon the universal characteristics of Truth-Compassion-Tolerance, and practice gentle exercises and meditation to maintain their health.

Throughout China’s labour camps and police stations, practitioners have been subjected to torture and humiliation. It has been particularly bad for women and both male and female police performing acts of the most horrendous torture and sexual abuse.

There has been sexual torture, including stripping 18 women of their clothes and forcing them into the jail cells of male criminal offenders where they beaten and gang raped. Some women have been subjected to forced abortions. Some have been force-fed urine and faeces.

They have ripped off women’s clothes in public and shocked them with electric batons. Iron wire has been used to pierce nipples. They have sexually violated women using eggplants, toothbrushes and plastic water bottles. In one Female Labour Camp located in Jilin Province, the police inserted hot pepper powder into women’s vaginas in order to force them to give up their belief and practice of Falun Gong. They have forced electric stun batons into female practitioners’ vaginas to torture and shock them.

Many women have died from the torture others are mental and physical wrecks. But men also are being tortured by the Chinese police. They also are sexually tortured, burned with hot irons, beaten, deprived of sleep and shocked with electric batons.