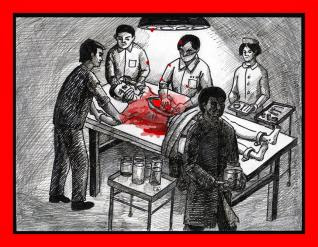 In Melbourne this week for a United Nations conference on global health, Mr. Matas said the main victims were Falun Gong followers, taken from forced labour camps where members of the group, which is banned in China, are sent for ''re-education''.

China reluctantly acknowledged last year that the bodies of executed prisoners have been used to harvest organs, but despite it promising to crack down on the practice, a thriving trade remains. Read more...