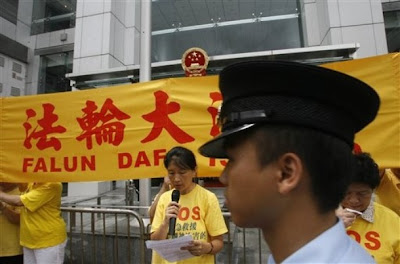 China Worker: Until this week, Beijing has refrained from commenting on the issue. Speaking at a meeting of the Hong Kong Journalists Association, Hao Tiechuan perhaps said too much when questioned about the possibility of reintroducing the legislation when he told the gathered journalists, "In time of crises in social order, resolution of the crisis and restoration of order is the top priority... Assisting the government in crisis management measures is the top priority of the media and monitoring the government comes second."

His comments should come as no surprise, coming from the mouthpiece of the Beijing government who practice complete control over all media on the mainland. However, the fact that they have chosen this moment to once again raise the issue shows that they are testing the waters for a second attempt at introducing Article 23.

On several occasions people have been arrested for merely protesting outside the Liaison Office. Members of Falun Gong, a religious sect, union leaders and Legco members have all been arrested and charged by the Hong Kong authorities at the behest of Beijing. Read more